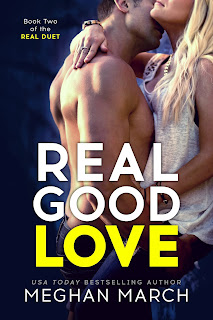 "You...you want to live with me? Like move in together?"

I lower the bowls to the counter and turn to face her, my sweet tooth on hold for a moment. "Are you seriously asking me that question?"

Banner nods. "I seriously am."


I've been a Meghan March fangirl from the moment I read Beneath This Mask a little over two years ago. While I may have read all her books, I confess that it's been hit-and-miss over the past year. But with the release of the conclusion to her Real duet, she's reminded me why I fell in love with her writing in the first place and why I remain a proud Runaway (which is what we Meghan March fans and readers are called). This duology got off to a great start with Real Good Man, but Real Good Love put everything into fifth gear and snagged that checkered flag even before it reached the finish line. March's writing was so damn on point, with the humor and wit she's known to add to her books at an even higher level, and she added an air of mystery and a dash of suspense to the mix, with the town of Gold Haven, Kentucky trying to come to grips with meth cooking labs springing about. Oh, and then there's the whole idea of a city girl deciding that she isn't going anywhere except standing right beside her mechanic of a good man, much to the indignation of the single womenfolk of the small town that's now her home.

Banner Regent's return to New York is under far more somber circumstances than she ever anticipated, but she's in for quite a surprise when she learns of what her curmudgeon of an elderly neighbor has in store for her. It certainly changes some things in one aspect of her life, but could she really ever consider New York her home again, what with Logan Brantley waiting for her back in the small town in Kentucky where everyone seems to be up in everyone else's business? This could be the fresh start that she's been wanting for so long, but with the single women of Gold Haven making her feel less than welcome, Banner realizes that she's going to have to make her claim on the man that's changed her life in all the good--and dirty--ways she's only dreamed of. Logan himself is on the cusp of putting his shop on the map, but with so much negative press the town's been receiving because of a meth problem spreading like wildfire and with several individuals looking like persons of interest--including him--could he ever truly be the kind of real good man that could give the real good kind of loving his city girl deserves?

I admit that I had my apprehensions when it came to Banner in the first book, but Lordy, the woman won me over with her sass and spunk and by the simple fact that she loved Logan unconditionally. She came into her own here, no longer the girl from the city that was used to the finer things in life and enjoying a good shopping spree as much as she did a good party. Banner and Logan brought an interesting mix of stability and wildness to each other's lives, and their love story played out in both a coy and a cute manner. I loved having new characters to fawn over, leaving me hoping that they'll get their own series or standalone later on, as well as touching base with characters from the Dirty Billionaire trilogy and Dirty Girl duet as well--Creighton Karas and Holly Wix and Greer Karas and Cavanaugh Westman, respectively--and seeing where they're at in their relationships. I have my eye on a certain cop and salon owner plus the reporter and a firefighter as well. Whoever said life in a small town was boring has never heard of Gold Haven, Kentucky. Real Good Love is one of my favorite Meghan March novels. Five-plus stars! ♥

Read my reviews for the Real series: