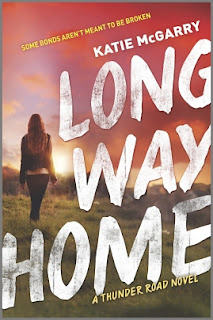 Note: This ARC was provided by Harlequin Teen via NetGalley in exchange for an honest review.

And there's no more thrumming.

Just his heat, warm covers, his heartbeat, his promise, the rise and fall of his chest and my body wrapped around his.

This. Just this. I'm finally home.


Chevy McKinley was Violet's first in more ways than one. He remains her only in ways she keeps to herself, but while her heart will forever belong to him, his being a McKinley is what makes it difficult for her to be with him. When her beloved father died, Violet wanted nothing to do with the Reign of Terror MC. The men she once embraced as family are the same ones she's been actively pushing away with her words and actions. She's determined to leave Snowflake, Kentucky and live a life free of the MC, the very same MC that she knows Chevy is destined to patch into once he turns eighteen. As much as she loves him, Violet ended things between them because she believe that if he were forced to choose between her and the club, he would surely choose the latter. When she's forced to betray the club, will Vi to sacrifice the MC she's grown to hate or does she sacrifice herself?

The last thing Chevy's ever wanted to do was to hurt those he loves most. The Reign of Terror has always been part of his family and his grandfather being the club president makes it obvious that Chevy's expected to become a prospect soon. But Chevy's mother has never wanted the club life for him, and when Violet lost her father, all she wanted was for Chevy to run away with her and leave the club behind. Chevy's at a fork in the road at only seventeen. He's the youngest in their group of four friends composed of two boys who are more like his brothers and the one girl he loves, and while they've all made their choices as to where life will take them next, Chevy is stuck, unsure of which of the paths before him he should follow. When threats are made, Chevy is left with little time to finally make crucial decisions, but will he be able to live with the ramifications when all is said and done?

I've been waiting for what feels like forever to read Long Way Home ever since it was clear that Violet wanted to get as far away as possible from the very motorcycle club she once considered family and how the boy she walked away from wanted nothing more than for her to find her way back to him. Katie McGarry knows how to write young adult (YA) stories that are go beyond the usual issues regular teenagers face. The teens of the Thunder Road series are teens but the fact that all four of them were born into the Reign of Terror MC makes them extraordinary. Their issues are made more complicated by who their fathers are and the legacy that they carry can oftentimes feel like a burden, especially for ones still making their way into the world and discovering who they truly are. The first novels were intense reads, but this third and latest release is probably the most heartrending one in my opinion.

I know what it's like to not want to make a decision out of fear that you're going to end up hurting someone's feeling, so Chevy's indecision was something I empathized with. Of course, waffling doesn't really move you forward and feelings still end up getting hurt. I also totally understood where Violet was coming from. She was a daughter who lost the most important presence in her young life and she needed someone to blame. While this was a story about finding love once again--though it clearly never really went away--between two young people who feel lost, it's ultimately a story about family and how family isn't always about blood and how family will be there to love, accept, and support you regardless of whether you do what you think they want or not. That doesn't mean that having family will always be easy, but at the end of the day, absolutely true family is what you make it.

There are quite a few full circle moments in this installment, and I expected this to be the last Thunder Road book, especially since all four teens have now gotten their stories told. However, it looks like there's one more novel in the offing--at least based on Goodreads and the hint that Addison deserves her own happily-ever-after after Violet got a glimpse of what she was hiding. I also had no idea that Isaiah Walker and Rachel Young were actually part of Katie McGarry's Pushing the Limits series, the third novel--Crash Into You--specifically. Now I'm going to have to push those books up my to-be-read list because Isaiah's appearance in Long Way Home has me intensely curious about more of his story and I need to read a series in order, so I'll be working my way to his and Rachel's story. But those are things for the future. For now, I'm going to bask in the five-plus-starred hangover that is Long Way Home. ♥

Read my reviews for the Thunder Road series:

Nowhere But Here (book one) - five-plus stars - My Review