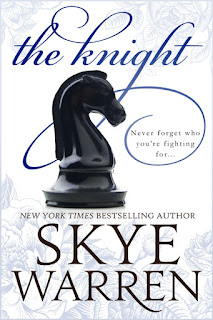 "You never really let me go."

A low laugh is the only response.

Because it's the truth. He toys with me, letting me run only to pick me up by my tail. It's a twisted game, meant to amuse him, meant to scare him.

Skye Warren has taken things up a couple of notches with the sequel to The Pawn. Illicitly and devilishly engrossing, The Knight continues where the Endgame series stater left off. Avery St. James's virginity was auctioned and the winner was none other than Gabriel Milller, and the man made good on his promise to break her and leave her bleeding. He then let her go, pushing her away even though what he paid for was a month with his little virgin. But while he's let her go, Avery isn't really free. Gabriel appears at every turn, and she's left confused each time, wondering if he's actually helping or hindering her efforts to reclaim the only home she's ever known. For far too long, she's felt like prey with him lying in wait. He's always seemed to be several steps ahead of her, but now, Avery's prepared to play his filthy game, and this time around, Gabriel's little virgin is playing to win.

Sex? Check. Suspense? Check. An antihero you'd hate to love but end up doing so anyway? One big, frickin' check. Okay, maybe not really love, but you have to admit that there's something about Gabriel Miller that makes it difficult to turn away from him, so I get where Avery's inability to resist him for long comes from...to a degree. I lost count of the number of times I seriously wanted to hurt Gabriel and then shake some sense into Avery. But setting aside my moments of frustration with these two, I loved where Skye Warren took us in book two. More questions were raised here, and I confess that I had these feelings of suspicion and doubt, and then BAM! Everything that happened at the ball and then at the end of the epilogue now has me antsy to have book three, The Castle in my hands, but I'm willing to wait because damn it, I think it's going to be worth it. The Knight receives five-plus stars. ♥

Read my reviews for the Endgame series:

The Pawn (book one) - five stars - My Review

The Knight (book two) - five-plus stars - My Review (posted above)