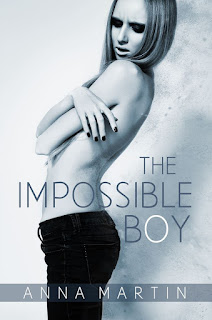 "There is no 'what if,'" Ben said, throwing his hands up in exasperation. "I love you. That's it. That has to be enough to make you want those things, Stan. I can't give you any more than that. I love you. Please. If you love me too, the only I want you to promise me is to never take the man I love away from me. Never take the man who made my life complete away. I would never be able to forgive you if you did that."

This book! Gah! It was everything I didn't know I wanted. The Impossible Boy is my first ever Anna Martin read and she blew me away with such hauntingly beautiful prose and raw and rich characterizations. In the nearly three hours it took for me to read this novel, my attention was solely on the words on my e-reader's screen. This wasn't the first LGBTQIA story I've had in my hands that had at least one character who was transgender, but Stanislav Novikov wasn't exactly that. He was gender-fluid, a label that, after Stan explained how he viewed his sexuality to his boyfriend's best mate, fit him best. It got me thinking as to the sometimes inane necessity people have when it come to slapping a label on everything because that's what they require in order for something--or someone--to make sense to them or to help them differentiate one person or thing from another. Stan was a man who had become comfortable with who has was sexually and he's easily become one of my favorite and most markedly unforgettable main characters I've come across in all my years of reading. And I'm 43, so that's saying something.

The Impossible Boy is about two men whose love story starts like countless hook-ups and some committed relationships do--in a bar. When twenty-six-year-old bartender Benjamin Easton sees the beautiful creature walking towards the bar, he's immediately taken notice. Then he realizes that his latest customer is actually a man, and Ben is even more intrigued by Stan Novikov. The attraction happens to be very much mutual. In his twenty-two years, Stan has been to his fair share of countries around the globe, but London has always been his favorite. With a new job at a magazine, his career as a fashion journalist and blogger is on firm ground. When he meets Ben and they begin dating, his personal life is finally going in a direction he's happy and content with. He's supportive of Ben's dreams of his band getting their music out to a broader audience, even if it may mean being apart while they're on tour. But the distance has them both missing each other's presence, leading Stan's history with anorexia to repeat itself, leaving both Stan and Ben struggling to find their footing in a relationship that has only just begun.

There's a quiet and subtle intensity to this book in terms of both story and characters that makes it an extraordinarily thoughtful read. It wasn't just in Stan's explanation of his being gender-fluid or his struggles with anorexia or Ben's own battle with being what and who his boyfriend needed. It was the overall feel of the novel and the fact that it didn't merely stir my emotions but it had me considering things that were new to me and re-considering other things that were already part of my knowledge base. I've written about Stan, but I also need to point out how memorable Ben was as well. When his eyes locked on Stan, he didn't have all these preconceived notions in his head about what a male or female should look like or how they should act. He accepted Stan wholeheartedly, with nary a reservation. He loved his impossibly beautiful boy to distraction and as inspiration. I smiled with every celebration and my heart squeezed in empathy with each challenge they faced, but what was important was they learned to face those together, as partners. And Tone? Favorite supporting character. Ever. The Impossible Boy is a book you shouldn't add to your TBR list; it's one you simply need to read today. Five-plus stars. ♥