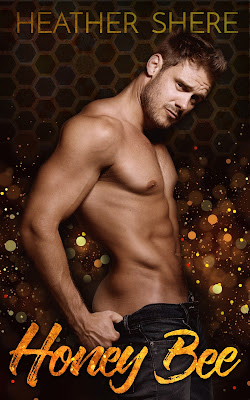 The introductory line of the synopsis for Honey Bee states that love can either be as sweet as honey or sting like a bee, and after having finished this first ever Heather Shere read of mine, I must say that those were wise words indeed. It doesn't even necessarily have to pertain to just the aspect of love but it speaks of life in general and the events that occur in our life. We aren't always guaranteed happy ending or even positive results, but if you don't take those risks or open yourself up to something new or different or to plain, old change, then you may never get to experience that sweet part of life. This love story truly was sweet and with the bonus of addition of a frisky dog named Triton who knows how he's the king of his human mama's world, it was a heartwarming and light romance.

In her early twenties, Sophia Brown has decided to plant roots in her parents' hometown. With only her faithful four-legged companion by her side, Sophia has a beautiful new home and is excited to have a place that will also allow her to harvest her honey straight from the source and use them in her concoctions and creations. But just a week in and she's already in the midst of an emergency when Triton has to be rushed to a veterinarian. The football coach she's been quietly observing as he and his team practice in the field across from her new house reluctantly offers to help her out by recommending the town vet and driving her and Triton over. She's drawn to the good-looking man, but he blows hot and cold and his clear dislike for Triton have her wary about getting stung.

At twenty-seven, Bo Smith isn't looking for a committed relationship. He doesn't want to have anything to do with animals either, and even his sister and brother-in-law being the town's veterinarians doesn't mean he wants to hang out at their clinic with them. But when he spots the town's new resident--and the same young woman he's noticed ever since she arrived--needing help getting her mountain of a dog in her vehicle, he finds himself helping out. He's attracted to the beautiful woman, but her dog appears to have made it his mission in life to get up close and personal with Bo every. Single. Time. There's a reason why Bo is the why he is, not just with animals, but with people in general. Will he allow himself to experience the sweetness Sophia offers him or choose to remain bitter?

Yep, I admit it. Triton was my favorite thing about the book. But then if you know how much of a dog lover I am, that tidbit shouldn't be too much of a surprise. That isn't to say that that was the only thing that I liked about the book. This didn't have the usual bitter-about-love theme nor was this about unrequited love or broken hearts. Bo's reason for not wanting to be around animals is a heartbreaking one, although I did want to smack him each time he was a jerk towards Triton, who clearly just craved his attention AND affection. Heather Shere put her own spin on things, making this a more refreshing read than most, although it felt as if something that was hinted at early on fizzled without explanation. Honey Bee gets four stars, and I do hope Lawrence Miller gets his own story as well. ♥