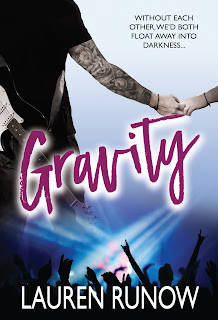 Note: This ARC was provided by the author via WordSmith Publicity in exchange for an honest review.

Gravity is a standalone rock romance with a friends-to-lovers and second chance love story feel to it and it's my first Lauren Runow read. Lily Pace and Trevin Allen forged a friendship for the ages when they were eight, with Lily becoming Trevin's light in a home life filled with darkness. She's there to push and inspire, reminding him of everything that he's capable of and making sure he knows that there's someone who cares about him. It's Lily who paves the way for him to have the opportunity of a lifetime, and while his dreams begin to come true, Lily starts to see what a nightmare it can be if Trevin allows himself to be distracted by the trappings of success. Trevin has never imagined what life would be like without Lily by his side, but is it even possible for him to have her while also having his dream of becoming a musician? What will Lily have left if she loses herself by giving Trevin everything?

When the author tells readers that this isn't your typical sweet romance, she's right. There's a great deal of angst that both main characters are saddled with. Their story takes place over the span of over decades and it's fraught with difficulty, mistakes, and regrets. However, there's also the hope that true love will triumph at the end of it all. It isn't Trevin's love for music that overshadows his love for Lily, but rather his excesses when he's achieved some level of success in the music industry that creates a wedge between him and the only person who's ever truly mattered to him. There are moments where frustrations arise as to how Trevin and Lily are mishandling their relationship, but it's best to remember that these two are human, making them flawed. But the love they share is sincere, so you cheer them down because after everything, they do deserve a happy ending. Four stars for Gravity. ♥