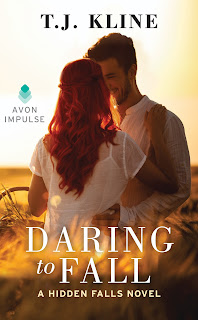 Daring to Fall is the second novel in author T.J. Kline's Hidden Falls series and it's the love story between firefighter Ben McQuaid and wildlife veterinarian Emma Jordan. Ben's and Emma's paths cross when Ben is called in by his police office brother to rescue a kitten from a tree, only the supposed kitten turns out to be a very young bobcat. He takes the bobcat to the Sierra Tracks Animal Sanctuary, which is now managed by the late owner's daughter, Emma. Times haven't been easy for the sanctuary, not after her father decided to close out to educational tours and the like. Emma has also been looked upon by certain members of the staff and some townsfolk as someone not worthy to follow in her father's footsteps, with people making up their minds about who she and what she's capable of based on rumors and gossip. Things get off to a rocky start between these two headstrong people, but the underlying attraction they share takes over soon enough. But trust doesn't come easily to either one of them. Will it take having lives--both human and animal--threatened for these two to realize that what they have is more?

Emma is strong-willed and independent, not asking for help for as long as possible, while Ben likes stepping in when he sees someone needing his assistance and support. There's a lot of bickering that these two engage in, and while it tends to get testy and has them squaring off, there are times that it serves more as foreplay. There's a definite connection between Emma and Ben, and they were both likable characters. I do confess, however, that I didn't enjoy this second in a series as much as I did the series starter, Making the Play. I liked the story of Emma trying to continue the legacy her father set forth and Ben trying to show Emma that she isn't as alone as she thinks she is in the endeavor, but there were times that I didn't feel as invested in what was going on. That doesn't mean that I hated the book overall. Again, I actually did enjoy it to a certain degree, just not at the same level as I did its predecessor. I liked the mystery suspense angle a tad more than I did the romance, but overall, Daring to Fall remained an entertaining read, and I'm looking forward to learning whose story is up next. This receives four stars. ♥

Read my reviews for the Hidden Falls series:

Making the Play (book one) - five stars - My Review