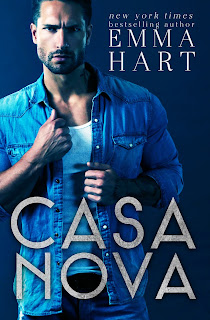 Casanova is the new standalone novel from bestselling author Emma Hart, and with a follow-up slated for release in a few months, this looks like the start of a new series as well. Second chance love stories are a dime a dozen, but Hart has put a couple of twists with this one, giving readers a romance about redemption and absolution between two former best friends who were secretly in love with each other but had no idea that the feeling wasn't as unrequited as they thought it to be. Miscommunication, teenage hierarchies and insecurities, and a love that never really died are at the heart of this contemporary romance, and its anchored by a cast of characters that don't merely have a role to play, but they play it to the hilt, with the supporting characters never trying to steal the spotlight from the main couple, Brett Walker and Lani Montana, who themselves are so wonderfully entertaining.

It's been eight years since Brett Walker and Lani Montana last saw one another, but while Brett may be anxious to see his former best friend and find out why she left right after their high school graduation without a word of goodbye, Lani has no intention of ever speaking to him. Hearts were broken eight years ago, and while both Brett and Lani have questions that continue to linger, they're both very different from the teenagers they once were. Brett wants to get to know the feistier, more fiery version of Lani, and Lani wonders if the kind-hearted, protective boy she fell for is merely hidden beneath the carefree--and careless--playboy persona Brett now carries. When she agrees to take on the job of writing articles that are meant to provide positive PR for Brett, she's up to the challenge of showing Brett's best face to the public. But can Brett convince Lani that he's still the best man for her?

The first part of this book had me wanting to take a break because it felt tedious, with Brett purposely getting on Lani's nerves and Lani getting up in Brett's face. She was trying to show she wasn't the mousy girl Brett always defended, and he was trying to show that he wasn't the nice guy Lani once believed him to be. Things got more interesting in the second half, with Lani putting more of an effort in getting over her issues with Brett and with Brett proving everyone else wrong about him. As far as why and when Brett changed is where I have some hesitation, mainly because we don't really get an in-depth look at the "why" and focus more on the "when". Then there's Lani's new boss and his lack of motivation for going after the Walkers in general and Brett in particular. I wanted to delve more into the nitty-gritty, but only got a bit below the surface. All in all, Casanova gets four stars. ♥