Review: The Boss by J.L. Perry 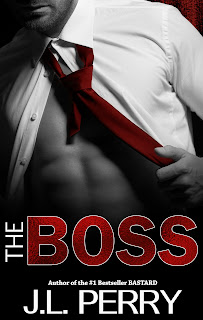 Harrison Williams has worked hard to achieve the level of success he now enjoys, but finding a secretary who's able to keep up with his demands is easier said than done. When Hanna Scott volunteers to temporarily step in while she's on vacation from university, Harrison knows she's more than qualified but he's hesitant to take her up on her offer. After all, how the hell is he supposed to focus on work when the woman he's been fantasizing about since he was seventeen and she was fifteen will be in such close proximity to him on a daily basis? As much as he wants Hanna, he can't pursue his feelings for her, not if he wants to keep his friendship with her brother Ethan intact. But when Harrison and Hanna have to travel together on business, they're in even closer quarters. How long can he resist the one female he's always wanted, especially when she makes it clear she wants him just as much?

With each new J.L. Perry book that lands on my e-reader, the more impressed I become with her writing. The Boss is the shortest read I've come across from Perry but she doesn't scrimp on the foreplay, the romance, the sex, and the tension--sexual and otherwise. Originally written as part of the multi-authored Alphas of Sin anthology, the short story has been expanded into a novella and answers those lingering questions as to what would have happened once the main characters--Harrison Williams and Hanna Scott--returned home, especially what ramifications their new relationship would be forced to deal with once Ethan Scott, Harrison's best friend and Hanna's older brother, finds out about them. This was a really good take on the falling-for-your-best-friend's-sibling trope, with fantastic writing, a surprise or two, and main characters who were easy to like. The Boss gets 4.5 stars. ♥