Review: Any Time, Any Place by Jennifer Probst (Billionaire Builders #2) 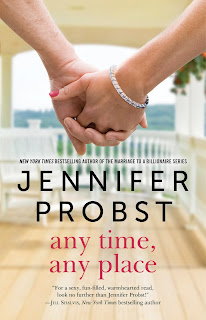 Any Time, Any Place is the second novel in bestselling author Jennifer Probst's Billionaire Builders series about the Pierce Brothers. Here we have the story of youngest brother Dalton and Raven Bella Stratton, owner of My Place, the favorite place for people in their town to hang out at. Dalton has noticed Raven from the moment he saw her, but try as he might to get her as interested in him as he is in her, Dalton is meet with constant rejection. When he proposes that he work on the bar in order to restore it to its former glory, Dalton and Raven find themselves working closely together. Of course, Dalton has no idea that Raven has been attracted to him from the get-go, but doing anything about that attraction isn't part of Raven's plans. You see, Raven and Dalton are tied in a way that only Raven knows about--it was her father his mother was running away with the night they died, and it's her father that was made to look like the villain in the ill-fated love story. That accident changed both their lives forever. In order for them to even have forever, Dalton and Raven will have to confront their very painful past first.

When Dalton's mother died and he and his brothers learned that she was running away with another man, all three boys were heartbroken by their mother's perceived betrayal, making their own once close relationships strained for five years. Their father's caveat in his will may have been manipulative, but working together at Pierce Construction has helped mend their relationships, but Dalton is still seen as the youngest brother who can't handle the kind of responsibility his older brothers are currently in charge of. He's a complicated guy who isn't looking for commitment, but Raven certainly has his interest piqued and her constant rejection of his advances have him even more curious about the bar owner. I liked these two together and the complexities surrounding their romance are far more difficult to maneuver around because it does involve the one parent they were respectively closest to. Naturally, the truth about how their families were connected was bound to come out, and I can only imagine how gut-wrenching it would have been to be in either one of their shoes, especially since they were already so in love.

So far, I've been quite happy with the way the Billionaire Brothers series has been moving forward. The first two novels can be read as standalones, but because it does involve one set of brothers, I feel it would be best for the books to be read in order. While there's the expected angst in Dalton and Raven's story--because this kind of story line demands it, after all--there's also a fair amount of humor attached to it, so it isn't this overly read that'll leave you feeling emotionally wrung out by the time you finish with it. Jennifer Probst also gives her readers main characters that you feel you want to really get to know and in doing so, you become invested in them and their relationship. Why read a book if you don't care about what's going to happen to the people you're reading about, right? The story itself went in a direction that served Dalton and Raven's relationship best, but what I loved most was how Raven and the three brothers were able to respectively reconcile their feelings towards the truth surrounding Diane Pierce and Matthew Hawthorne. Any Time, Any Place was an endearing 4.5-star romance read. ♥

Read my reviews for the Billionaire Builders series:

Everywhere and Every Way (book one) - five stars - My Review

Purchase Any Time, Any Place on Amazon | B&N | iBooks | Kobo.