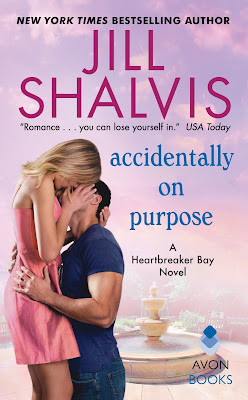 About Accidentally on Purpose
There’s no such thing as a little in love . . .

Elle Wheaton’s priorities: friends, career, and kick-ass shoes. Then there’s the muscular wall of stubbornness that’s security expert Archer Hunt—who comes before everything else. No point in telling Mr. “Feels-Free Zone” that, though. Elle will just see other men until she gets over Archer . . . which should only take a lifetime . . .

Archer’s wanted the best for Elle ever since he sacrificed his law-enforcement career to save her. Their chemistry could start the next San Francisco earthquake and he craves her 24/7, but Archer doesn’t want to be responsible for the damage. The alternative? Watch her go out with guys who aren’t him . . .

As far as Archer’s concerned, nobody is good enough for Elle. But when he sets out to prove it by sabotaging her dates, she gets mad—and things get hot as hell. Now Archer has a new mission: prove to Elle that her perfect man has been here all along . . . 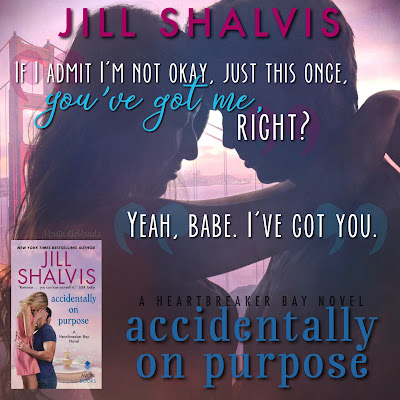 Add Accidentally on Purpose on Goodreads.

An Excerpt from Accidentally on Purpose
#TrainWreck

Elle made a move to snatch the knife from Archer’s fingers but the bastard held firm. She started a tug-of-war with him before remembering that she no longer let anyone see her sweat and forced herself to go still.

Not that Archer let go. “You still have it,” he said, a whisper of surprise in his voice.

The equivalent of a full-on double take from the man who was all but impossible to shock.

And yes, of course she still had the knife. Did he really think she wouldn’t? She didn’t blush very often but she felt heat rush to her face now. Regret, partly.

She’d very carefully taught herself to be strong and confident and to never look back.

Sentimentality didn’t have a place in her life. Or so she told herself. So why then had she been carrying the small packet knife Archer had given her the night he’d saved her all those years ago? Especially since the thought of how she’d tried to repay him—and God, the humility of how she’d actually offered him the only thing she’d had, that being her body, which he’d turned down flat—still made her face flame. The worst part had been when he’d vanished like it’d been nothing to him, when to her it’d been everything.

She might not know why he’d done what he had but she still wasn’t leaving here without that knife. It was a badge. A reminder of who she’d been and who she was now.

Neither of them had moved. Around them the night life in the pub went on. Laughter, conversations, more dancing…all oblivious to this tight, little cocoon of just the two of them crouched in front of the bar. They might as well have been completely alone for all the attention anyone paid them.

Balanced with apparent ease on the balls of his feet, Archer leaned in even closer if that was possible, close enough that his knees touched hers. Close enough that she could see every single gold spec in his hazel eyes. Every single black-as-ink eyelash framing those eyes. He was hours past a five o’clock shadow and a muscle ticked in his square jaw.

A rare tell from a man who could be a stone when he wanted.

The rest of him was as big and bad and intimidating as ever. His large body blocked out everything behind him and although he could be terrifyingly scary when he wanted to be, he never was with her. With her he was careful. Cautious.

And she hated that most of all.

This time when she tried to tug the knife from his long fingers, he let her. Rising, she stared down at him. “We done here?”

He rose to his feet too. And just looked at her. 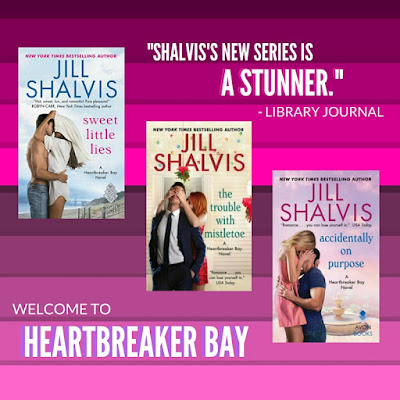 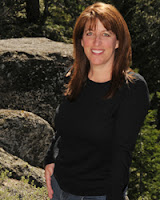 New York Times and USA Today bestselling author Jill Shalvis lives in a small town in the Sierras full of quirky characters. Any resemblance to the quirky characters in her books is, um, mostly coincidental.

Look for Jill’s sexy contemporary and award-winning books wherever romances are sold.