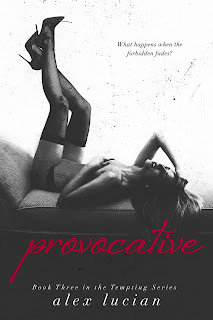 If you're familiar with my reviews, you'll know that I prefer to read books in a series in order. I try to make it a point to go through every novel and novella in a series before even contemplating starting whatever's the latest release. I think it gives a better and more well-rounded reading experience, even when an author or publisher tells you that a new release is a standalone. So, you would think that I would have read Beguiling, the second book in the Tempting series, after reading the series starter by the same name, right? Well, due to a packed review schedule, I had to skip book two, but I felt it was okay to do so since it was about a totally separate couple--though you do meet the hero in the first book--and books one and two are focused solely on Nathan Easton and Adele Morello. We read how this unlikely couple met and became intrinsically part of each other's lives in Tempting; In Provocative, the third book in the series, we see if they finally get a happily-ever-after, but not after facing hurdles to their love threaten to end them.

Professor Nathan Easton and Adele Morello may now be in separate universities, but their lives are entwined in the same home. They've created their own bubble, but that bubble bursts when an unexpected surprise ends up becoming their greatest loss as a couple, affecting their relationship adversely. Nathan and Adele are grasping at straws, trying to continue on to the beat of a drum that only they could hear. But things are no longer as they once were. The ties that once bound them tightly to one another are becoming frayed and taut, until it reaches a breaking point that neither Nathan nor Adele can turn back from and what was once unbreakable cracks and could shatter unless things change. Even when they were together, the loneliness crept in and now, they are truly alone. Is there any hope left for Nathan and Adele to heal and get back what was once theirs or could the re-appearance of a divisive figure wreak further havoc on an already frail relationship? To have a future together, their pasts and presents will have to be resolved.

The story picks up a few months after the end of the first book. Now, remember, I didn't read the second book, so I honestly have no clue if Nathan and Adele played any part there and if there was any sort of progress mentioned their with as far as their relationship is concerned. Nathan and Adele are forced to deal with loss--that of their joint loss and the loss Nathan experienced several years ago when his wife Diana passed away. The age difference, her being a student and his being a professor, their respective less than ideal families, these are just some of the things weighing on them in varying degrees, and not even sex can distract them from their issues. I found my heart aching for both Nathan and Adele, even as I found myself frustrated at Nathan's reticence and Adele's impetuousness. After everything they've been through, they're owed a happily-ever-after and if you appreciate well-written erotic romances, you'll want to check out Tempting first, then followed by Provocative, which like its predecessor, receives five stars. ♥