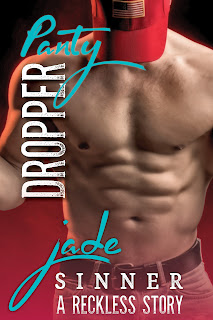 Panty Dropper is the second novella in the Reckless series from Jade Sinner and has a second chance romance theme to it. This features Ryan Briggs, introduced in the series starter as Emma Briggs's older brother and Ben Westbrook's best friend, and Ashlyn Shepherd. Ryan has never forgotten the one who got away. When he and Ashlyn spent that one night together, he knew one time wasn't enough, but she upped and disappeared. He's thought about her every single day and even tried looking for her to no avail. Five years pass and the baseball player turned coach is slowly getting his bearings back after surgery to his torn rotator cuff when his recovery nurse steps in to check on him. She's beautiful...and she's Ashlyn. Ryan believes fate's brought them together, but can he convince Ashlyn that he isn't the player she thinks he is?

This was a fun and filthy novella with its fair share of angst courtesy of the twist in the story. Ryan and his close-knit circle of friends were introduced to readers in Cherry Popper and it looks like each one is going to get his happily-ever-after as the series progresses. Ryan and Ashlyn have a shared past but any possible future was put on hold after one simple misunderstanding. I won't say anything more regarding what the misunderstanding was about or what the twist is, though the latter won't be too difficult to figure out or even guess. If you'r expecting courtship and love developing over time, reads like this won't work for you. However, if you like smutty quickies, Panty Dropper is a four-starred read you may feel like checking out. ♥