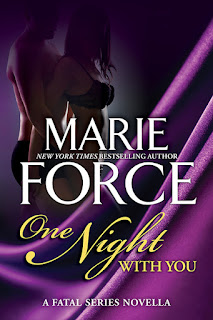 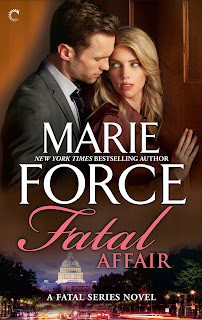 “I’m trying, Sam. Really I am, but I can’t help that I feel this incredible pull to you. I know you feel it, too. You felt it six years ago—as strongly as I did—and you still do, even if you don’t want to. If had me again under different circumstances, can you tell me the same thing wouldn’t be happening between us?”

One Night with You is the prequel novella in bestselling author Marie Force’s much-touted and beloved Fatal series and it starts it off on just the right foot. It’s included in the paperback version of Fatal Affair as a bonus story located at the end of the full-length series starter and it happens to be currently available for free as an ebook through online retailers, so I suggest you get one-clicking. Here, Samantha Holland is twenty-eight and a detective with the Metropolitan Police Department of Washington DC and Nicholas Cappuano is thirty and works for a congressman. They meet at a party, both reluctantly attending as a favor to others, and they hit it off immediately. They share one unforgettable evening together with the promise of Nick calling Sam upon his return from a four-week European trip with the congressman. It ends on both a hopeful and a curious note and with the synopsis for Fatal Affair, it’s easy to see that neither Sam nor Nick got their happily-ever-after, one that was so teasingly promising.

And that leads me to the first full-length novel in the series, Fatal Affair, and by the time I finished reading it, I had to ask myself why the hell I was only starting the series now, just when the tenth full-length novel was less than a week away from being published. Because yes, readers and bookaholics, I’m officially hooked on all things Sam Holland and Nick Cappuano and all it took was the perfect pairing of one novella and one novel. Marie Force took two people who shared one unforgettable night together and then made promises—both uttered and those that remained unsaid—to each other only to have six years pass before they see each other again and under the most horrific of circumstances. It’s a second chance romance wrapped in all that thrilling goodness that only a romantic suspense of this caliber can make work. There’s no act in the perfect balance Force has created for this official series starter and if everything else that comes after is, at the very least, at par, then I will be a happy camper.

His boss—who just happened to be his best friend—was late and it was up to Nick Cappuano as Senator John O’Connor’s chief of staff to drag him out of bed, regardless of who he was sharing it with. But what greets Nick is a gruesome scene, one involving his closest friend, a man who was like a brother to him, having been stabbed in the neck and subsequently, bleeding to death on his bed. The detective sent to head the investigation is the one woman he’s never forgotten in the six years since he last saw her: Detective Sergeant Sam Holland. The murder leads to countless questions but there’s a particular one that both now have the opportunity to get an answer to: What happened six years ago? The answer to that comes more quickly than the ones related to the crime, and the longer the investigation goes on, the more the questions pile up and the more intriguing the suspect list gets. The last thing Sam and Nick need is the added complication of a rekindled affair, especially when their lives are suddenly threatened.

There was not one single point in this book where the story lulled. It was a lengthy read but it held my attention the entire time because a story this good deserves it fully and absolutely. I had my own theories and my own list of suspects and admittedly, I only figured it out when the actions of one new suspect didn’t mesh with how I saw their personality. I love romance novels, but those that have that merge nicely with another genre, especially when it’s one that I enjoy, always feel more enticing because of the additional elements thrown into the story line. We’ve also got ourselves two main characters who have such an amazing dynamic between them and they mesh so well with what I will assume is a recurring cast of supporting characters, with Detective Frederico “Freddie” Cruz being my favorite. I honestly can’t wait to delve even deeper into the series because it’s been a good, long while since I’ve read a continuing series with the same characters this superb. One Night with You and Fatal Affair get five-plus stars!

Download One Night with You on Amazon | B&N | Kobo.

Purchase Fatal Affair with One Night with You on Amazon | B&N.