Review: Too Hot to Handle by Tessa Bailey (Romancing the Clarksons #1) 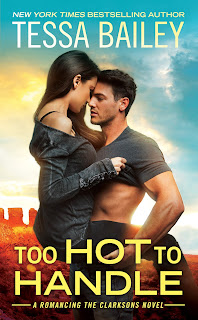 Note: This ARC was provided by Grand Central Publishing (Forever) in exchange for an honest review.


Too Hot to Handle is the first novel in bestselling author Tessa Bailey's new adult contemporary romance series from Forever Romance entitled Romancing the Clarksons. The four-book series follows the Clarkson siblings--Belmont, Rita, Aaron, and Peggy--as they make their way to fulfill their late mother's dying wish. Along the way, they discover things about one another and try to forge stronger relationships with each other and meet other people that have them unexpectedly falling in love or spend more time with that one person they've clearly had a thing for. This first book is about Rita, the daughter that discovered her mother's diary that had her wish written down in and the one that followed in her mother's footsteps when it came to her career as a chef. When the three-Michelin star restaurant that her mother started burns to the ground and Rita tells her three siblings that she's going to fulfill their mother's wish, a cross-country road trip begins for the four, plus one other passenger--Peggy's best friend and the special additional request by Belmont, Sage. Their Suburban breaking down somewhere in the middle of  New Mexico introduces Jasper Ellis, the former bad boy that makes Rita wonder if she's found her new home.

I've enjoyed Tessa Bailey's books in the past and I was looking forward to starting this new series, especially since it was about four siblings who all loved their mother fiercely but seem to not have the kind of close-knit relationship you would think they should have had all their lives. If we're talking about the siblings' story as a unit and as individuals, I was, indeed, quite interested to see how these four would mend their siblinghood. There were parts when they were all together that felt familiar to me, what with me belonging to a brood of five and being smack dab in the middle of the chaos. I'm definitely going to keep going with the series because I truly would love to see these four siblings have the kind of relationship that doesn't require them to be together in the same city or town to know that they can count on each other to be there for them. When it comes to the romance element of the book, though, I admit that I felt as if something was missing between Rita and Jasper. They had some good moments and, as can be expected from a Tessa Bailey book, quite a few hot ones, but I couldn't seem to find the thing that made them click as a couple. My 3.5-star rating for Too Hot to Handle is due in large part to the story of family. ♥

Purchase Too Hot to Handle on Amazon | B&N | Kobo.