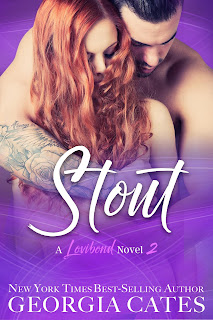 Stout is a full-length adult contemporary romance novel and the second book in the Lovibond series penned by bestselling author Georgia Cates, which features the three men who own the Lovibond Brewery. This sequel to Tap features Oliver Thorn, younger brother to Lawrence Broussard nee Thorn and Lucas Broussard's business partner and one of his best friends. When twenty-nine-year-old Ollie, nicknamed Stout by his friends at Lovibond Brewery, moves into his brand new home, he doesn't expect one of the best things about the family-oriented neighborhood to be his very beautiful and very much single next-door neighbor, twenty-seven-year-old event coordinator and business owner Adelyn Maxwell.

Oliver and Adelyn, who he has affectionally nicknamed Max, become fast friends and she's more than willing to gift him with the results of her baking efforts with a side of flirty goodness on the side. She's got the red hair that Ollie's always been drawn to and she brings a combination of sunshine and sass, but it's the darker, dirtier side, the one that she only reveals when they're together intimately for the first time that. Oliver doesn't know quite how to deal with what she asks him to do to her in the bedroom. He's got his own demons that he's had to live with and he contemplates if he can give Adelyn what she needs. And when the two decide to make a go of a relationship, fate shows her hand and it may spell the end for them.

This was a really good follow-up to the Lovibond series starter Ollie and Max are complicated individuals with dark pasts that they've tried to deal with, although not sufficiently enough since they still rear their ugly, little heads to mess with both the present and the possible future. There are a couple of twists in the story and I liked how they weren't thrown in just for the heck of causing conflict between Ollie and Max. There was one part in the book, though, where I felt iffy about Max and her actions regarding a life-changing event in her past, because I couldn't reconcile in my head a victim victimizing her abuser in the manner that she did. Maybe that's just me. Other than that, I consider Stout an overall good 4.5-star read. ♥