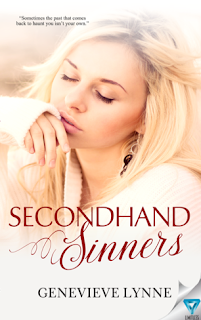 Note: This ARC was provided by Author's Pal in exchange for an honest review.


Secondhand Sinners is the debut novel of Genevieve Lynne and whatever my expectations were going into this romantic suspense thriller were blown out of the water with every passing chapter. You think you know what's really going on, but with one twist following an unexpected turn all throughout the book, the author's storytelling demands that you pay attention lest you end up under-appreciating this gem of a novel! Not only are the main characters and their joint history fascinating, it's almost every supporting character that plays a part in their story--past, present, and future. Everything plays out faster than you would expect in a book under this genre, but nothing is overlooked or goes unnoticed from start to finish.

Emily Matthews left her family and her hometown just as her senior year was beginning. At seventeen, she was left with very little choice but to get as far away and as quickly as possible. The death of someone very close to her and a shocking discovery has her racking up miles between her, the brother who she would miss, and the boy who owned her heart. Almost fourteen years later, she returns to Bokchito, Oklahoma, with her six-year-old son Jack in tow, to check on her brother Levi after he ends up in jail, forced to react to old secrets and demons that continue to haunt all of them. Being back in Bokchito also means she's going to bump into him again, the boy she loved. But that boy is now a man, one with a deep, dark secret.

Miller Anderson loved his ex-wife but never as much as he did the first girl who laid claim to his heart when they were seventeen. His life now is all about his teenage daughter Abby, but when he finds out that Levi Collins has landed in jail after physically assaulting his father, his life shifts yet again with the return of Emily, Levi's sister and the girl he loved. The anger and hurt over her abandoning him more than thirteen years ago still lingers. He wants to know why she did what she did, but demanding answers from her may require him to reciprocate and share his own secrets, and that's something he can't afford to do. But being around Emily brings back memories--both good and bad--and the dream to create all new ones.

I really quite liked Secondhand Sinners! You always take a gamble when you read a book written by an author you're unfamiliar, and with Genevieve Lynne making this her initial foray into the book world, I really had nothing to go on. How happy am I that the risk paid of?! This was such an entertaining story, one that lulls you into complacency before throwing something your way that has you sitting up and taking notice. The writing is fluid and keeps you interested in what happened to the characters in the past, what's happening to them now, and what may end up happening to them in the future. I loved Emily and Miller, but Abby really was a dear and I so adored her! I'm highly recommending Secondhand Sinners. 4.5 stars! ♥