Review: The Road to You by Harper Bliss 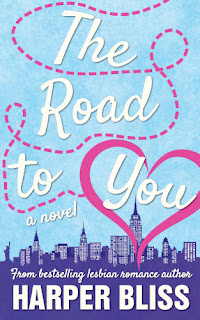 Harper Bliss's The Road to You is a standalone F/F romance novel that spans several years and takes the enemies to friends to lovers trope and inspires you to believe in fate and how, no matter how long it may take, the person destined for you will find their way to you. Katherine Shepherd and Alison West were nothing more than classmates in the same French class in college, barely taking note of the other's presence. When Katherine receives a less than acceptable grade on her paper, she proceeds to her professor's office to discuss it with her. What she discovers sets the course for Ali to see her as the person who messed up what could have been the making of "something more". Over the next few years, Ali and Katherine bump into each other and it's clear how different they are: Ali being the more carefree, creative spirit to Katherine's far more stoic, rule-following attitude. There are varying degrees of wariness and awkwardness between the two, but maybe, just maybe, time will break down their defenses and make both Katherine and Alison see what was right in front of them every single time destiny let their paths intersect.

This was a lighthearted read and one that was a nice change of pace in terms of other Harper Bliss books I've read in the past. Yes, there's a hint of drama and angst that sprouts now and then, but for all intents and purposes, this was a romantic comedy title that had female main characters who toed the line between not being able to stand being around one another and not being able to glance over and see where the other one may be whenever they were together in the same venue. Everyone around them seemed to pick up on the very potent energy these two were giving off each them destiny threw them together, but distractions were inevitable, whether they be in the form of other women or something else. There were moments that one seemed to be more mature than the other, almost as if the timing was always off with them. I found myself frustrated with their behavior at times, especially since you would think they had much more sense when they hit their thirties, but I guess when you realize the person you're falling for is the same one you couldn't stand for years, then denial is your friend. I'm giving The Road to You 4.5 stars. ♥

Purchase The Road to You on Amazon.