Review: In the Red by Chelsea Camaron (Devil's Due MC #1) 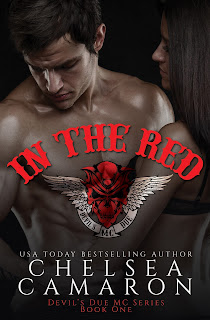 In the Red is the series starter for Chelsea Camaron's Devil's Due MC series, which is about six men who band together, forging a brotherhood founded on seeking their own form of justice for those who are no longer able to get it for themselves. This first book is about Dover Ragnes, who uses the road name "Collector" because he seeks out and collects justice and former police officer disillusioned by how fickle and unreliable law enforcement and the justice system are, and Emerson Flint, a tattoo artist who left behind a life where she saw little to no freedom at the hands of overly protective parents. Dover and Em knew each other in another life, one that involved forever nine-year-old Raleigh Ragnes, Dover's sister and Em's best friend. When Raleigh was viciously taken away from them sixteen years ago, both their lives changed forever, and the carefree seventeen-year-old older brother and nine-year-old best friend were never to be seen again, replaced by two individuals forever haunted by the loss of the girl they both loved.

The last time Dover Ragnes saw Emerson Flint, she was a young girl who, like him, continued to mourn the loss of the girl that connected them. Sixteen years after Raleigh's death, they both have new names they demand other people call them by--Collector and Sonnie--but they remain Dover and Emerson to one another. But Emerson is no longer the little kid who did everything with Dover's sister, and Dover is no longer the teenage boy who thought of nothing else than to be with his then-girlfriend. They've both grown up to the harsh realities of life, most glaring of all the knowledge that something--someone--can be stripped away from you at any time. While Raleigh may be what used to connect them, Dover and Em feel a very different and far more potent connection more than a decade and a half later. But can Dover afford the distraction that Em represents and can Em open herself to feeling more with Raleigh's brother? An ever-present danger could force these two erstwhile lovers apart or unite them toward one common goal.

I liked the idea behind the story, especially since it involved a small yet seemingly tight-knit motorcycle club that was formed with one idea in mind. Dover and Emerson may have initially bonded over their shared loss and pain, but the requisite chemistry in order to believe that they're meant for something more than a quick romp between the sheets was there, even though I did wish it were far more palpable and consistent than it was. The twist in the story was unexpected, allowing the story to go in a different direction than expected, and for that, the author deserves props. The five other members of the Devil's Due MC sparked enough of an interest for me to want to know each of their stories as the series progresses, though I admit that Mitchell Gates, aka Trapper, was the one who captured my attention the most and that bonus scene fortified my budding curiosity. The next book, however, is about Cole "X" Gallow, which makes me wonder if Trapper's story is last. In the Red was a pretty good four-starred start. ♥

Purchase In the Red on Amazon.