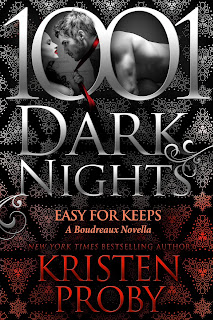 Anyone who knows me and my reading habits (coughADDICTIONcough) or is familiar with my reviews knows my penchant for reading a book series in order. I'm just a firm believer that it gives me an all-around better reading experience, and yes, even though authors will tell you that each of the books is a standalone. Now, admittedly, it's difficult to stick to that kind of thing, especially when you've signed up for a blog tour that's for a book that's several installments into an on-going series. It wouldn't be too much of an issue if I wasn't slammed with offline and online demands. Alas, I am, so this is one of those rare moments that I went into a book without having read all the other books that came before it. It wasn't a terrible experience, and I was still able to enjoy Easy for Keeps, a novella in the bestselling author Kristen Proby's Boudreaux series set in New Orleans. Of course, there were a couple of characters who clearly had a story that was told previously, so I'm making a point of reading those before or by the time the four full-length novel, Easy Kisses, is released in the latter part of June. Fingers crossed I stick to that goal of mine.

Easy for Keeps is all about single mother and social worker Sarah Cox, a new transplant to the Big Easy, and New Orleans native and bar owner Adam Turner. Having lost her beloved husband more than three years ago, Sarah hasn't really felt the inclination to put herself out there and date. When she meets Adam, who makes no secret of the fact that he doesn't discriminate when it comes to the women he sleeps with, he proves to be a temptation she may not be able to resist. All she wants is a a one-night stand and she's pretty sure that's all that Adam wants and has ever wanted from the opposite sex. But they're night together goes above and beyond what either one was expecting and soon enough, they realize that one night isn't going to cut it. Being with Adam has re-opened her heart to the possibility of falling in love again, but Adam has made it clear that he's never been in a committed relationship before. What happens when he tires of not just Sarah but little Hailey as well? When Sarah's job poses a threat Adam may not be able to save her from in time, will Adam realize too little too late that both Sarah and Hailey are for keeps?

This was a short but sweet and sexy novella and one that has that familiar Kristen Proby flavor to it. I don't think I've ever come across a book written by the author that had main characters I didn't like and same goes for this book. Books of this length tend to rely on the whole insta-love formula, but thankfully, that's not what happened here. We get an actual story and see how the relationship between Adam and Sarah plays out over time. I liked that Sarah was independent and knew what she wanted from both her personal and her professional lives. Adam may have been a lover of ladies in general but he wasn't a jackass about it, nor did he degrade women with his language or actions. If anything, he had a great deal of respect for the opposite sex in terms of their appeal to him. He's honest about what he wants and Sarah doesn't go around accusing him of being a manwhore. Little Hailey was a precocious supporting character who stole the limelight whenever she shared her kindergarten wisdom with whomever was within listening distance. I enjoyed Easy for Keeps and the rest of the Boudreaux series is on my to-be-read list. 4.5 stars! ♥

Purchase Easy for Keeps on Amazon.