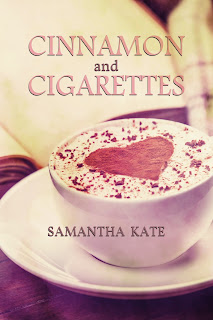 Cinnamon and Cigarettes is a standalone F/F contemporary romance and the debut full-length novel from author Samantha Kate. The book is about twenty-three-year-old library clerk Sara Clarke and twenty-eight-year-old computer programmer and former specialist in the military Moira Estrada. The two meet in the library where Sara works and they take instant notice of one another. While Moira is open about her being a lesbian, Sara has never confessed to anyone her bisexuality. She's initially hesitant, fearful of what people may think and say, but there's no denying how much she wants to give dating Moira a fair shot, and for once, Sara decides that being with Moira and getting to know her will be worth the risk.

She and Moira seem to fit one another to a T and their feelings grow steadily and surely the more time they're together. But as happy and as in love as Sara is with Moira--and Moira, in turn, with Sara--she has yet to openly talk to her parents about her relationship, and when she's pushed, she lies, pretending the person she's dating is a man. The pressure she feels from her parents and the pressure she puts on herself gets to her, affecting those her relationships with those who matter the most to her. In her desperation to not disappoint her parents, Moira ends up hurting the only person she's ever loved outside of her family. Will Sara choose to live the kind of life expected of her or choose to live her life with Moira by her side?

This was a pretty good story about being honest with yourself and honest with those around you. Sara was the kind of girl who did what was right and what everyone expected of her. She didn't want to rock the boat, but when she meets Moira, everything changes for her, though that doesn't mean that she fully embraces who she really is until it's seemingly too late. Sometimes, we have to lose something or someone in order to put everything in perspective. Sara's relationship with her parents provides insight on how different she is with them and how she is with Moira and her library friends, even her younger sister Hannah. All in all, Cinnamon and Cigarettes was a worthwhile read and I'm giving it four out of five stars. ♥