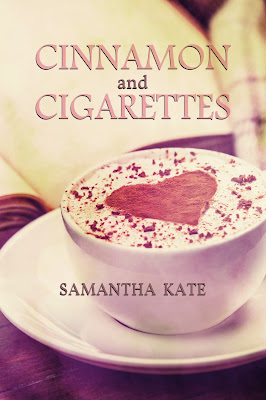 About Cinnamon and Cigarettes
Sara Clarke, recent college grad, is sweet, demure, and cautious in all things, but especially romance—until she meets Moira Estrada, a bold amateur pilot and patron at the library where Sara works. Their intimacy blooms rapidly as they share everything from a sudden medical emergency to Christmas with the Estrada family. With her dashing new girlfriend by her side, Sara learns to overcome some of her greatest fears, whether they be acknowledging her own bisexuality, flying across the sky in a Cessna, or falling in love for the first time.

But Sara’s fear of confrontation is harder to conquer. When asked about her relationship, she finds herself lying to her family, pretending to date a man so she can avoid conflict with her straight-laced and image-conscious parents. But her attempts to please everyone cannot last forever and could result in far worse than her parents’ disapproval: she might lose the respect of her new friends at the library, or become estranged from her sister—or, worst of all, Sara might lose the only person she’s ever truly loved. 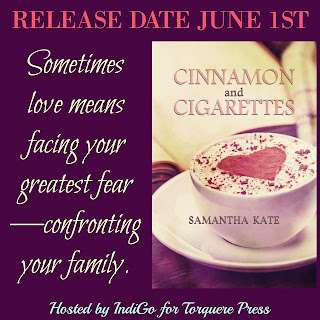 Read my four-starred review of Cinnamon and Cigarettes.

Add Cinnamon and Cigarettes on Goodreads.

An Excerpt from Cinnamon and Cigarettes
Moira pulled her key-ring out of her pocket, plucking out a large silver key from her collection. “Fasten your seat belt. We’re starting the engine now.”

She inserted the key; the plane gave a small lurch as the engine burst to life beneath Sara’s feet, and the propeller began to spin. This engine was nothing like the smooth start of a car; it ignited with a roar, like a motorcycle gunning to maximum velocity, and within moments that sound was pierced with sharp, rhythmic bursts from the propeller’s increasing oscillation. The sound was cacophonous; Sara put her hands to her ears, to block out a fraction of the din.

Amid the noise, she heard Moira speaking into her microphone. “Fairways Air Control, this is Lamassu. Oil pressure gauge is green, transponder is on. Are you receiving transmission?…Okay, thank you. Requesting permission to taxi to Runway Three…You’re the man, sir.”

Sara smiled faintly at her pilot. Moira’s combination of aviation jargon and casual slang was, admittedly, really endearing. So was the way her eyes widened as she scanned the blinking lights and bright monitors in front of her, grinning gleefully, looking simultaneously mischievous and reverent.

“Hang on,” Moira said, removing one hand from the controller and fumbling around by her feet. “I forgot to give you your intercom.” She withdrew another pair of headphones, handing them over. “These will help with the noise.”

Sara put on her headphones; the cacophony was quelled into the distance, now just a background ambiance. In the forefront now was Moira’s voice, smooth and sanguine, every word spoken directly in Sara’s ears.

“Removing parking brake now,” Moira said, a hand reaching out to pull the brake knob near Sara’s knee. The plane slid forward, and Sara gulped, hoping to keep her stomach from lurching as well. “Beginning taxi.”

They slid along the main “road” at a slow crawl. Sara noted each white stripe that passed by until they’d arrived at one of the runways; they did a slow 90-degree turn until they faced the open road. It was barely wide enough to accommodate the plane’s wings, and the forest was perhaps a mile ahead. Was that really enough space for them to take off? Even in such a small aircraft? Wouldn’t it take a massive amount of acceleration to lift them into the air? Was this even possible? Was it—

“Trim and flaps set,” said the voice in Sara’s ear, shaking her out of her fretting. Moira had a more “official” tone now, like one might hear over an automated line, with measured rising and falling inflections. “Engine temperature normal. Wingtip strobes on. Airspeed indicator reads zero.”

Sara fidgeted with the boom mic on her headphones. “That’s a lot of things to know about,” she whispered into it.

Moira turned her head, smiled, and put one hand on Sara’s knee. “That it is. But I’ve had my license for almost four years now, and if I were a shit pilot, they wouldn’t let me waltz back in those doors.” She grinned. “I’m going to bring you home safe, Sara. I promise.”

She pushed the throttle in, gradually but firmly, and they lurched forward, slowly at first, but soon they were gathering speed—the pine trees lining the runway lost the detail of their branches and needles, and soon they were a blur of dark teal and mossy green, punctuated by open field—and Sara’s stomach was shoved down and back into the seat; she felt like where she once had flesh and sinew and blood there was now only a void, an empty space filling itself with nothing but the rush of incoming air—

Sara hadn’t known what it was like to lose the ground beneath her until this moment, when Lamassu’s nose flicked up and an anchor tied around her feet her whole life came undone, evaporated, dissipated into the afternoon sunlight—she realized it existed only when it ceased to exist. Suddenly there was space around her in every direction; she was now bound by nothing. The seat belt wrapped snug around her waist, the windshield ahead, the pane of glass a few inches from her right cheek—they seemed trivial, insignificant, incapable of truly binding her when the space beneath her feet was exponentially expanding.

Soon the white lines beneath them vanished as well, as the runway shrank down, becoming a tiny part of a tiny complex that was quickly passing beneath and behind, no longer required, no longer relevant. She needed nothing in the air, only that constant whir of propeller oscillation, the humming of the engine, and the whipping of wind through the microscopic crack between the window and the fuselage. She almost thought she might float above her own seat, no longer subject to earth’s gravitational force.

“How are you feeling?”

Even Moira’s voice was distant now.

“I’m fine,” she said, in a tone that was half hummed, half spoken. She reached one hand up to the windowpane, tracing random curves along the glass with a couple of fingers. “I…I’m flying.”

“That you are.” Moira dropped her professional tone, her voice wrapping snugly around Sara’s head again. “And how does it feel?”

Even the trees were shrinking away now, becoming indistinct clusters of viridian mixed with a soft palette of mossy and earthy hues, separated by strips of gray asphalt drawing mechanical grids along the earth. She looked ahead, and for the first time took in the sky; its cerulean blue spread out infinitely across the horizon, accented with a few wispy cirrus clouds and an occasional burst of gold light reflecting from nearby lakes.

“Perfect.” Moira pressed a few more buttons, and the plane gently pitched forward, sliding into a consistent altitude. Within a few minutes they leveled off, thousands of feet above the earth, the bustling metropolis a mere memory behind them. 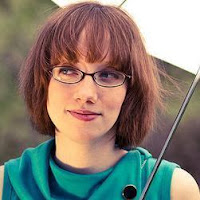 Samantha Kate works as a paralibrarian (that’s library support staff) for her day job. In her free time, she tries to pursue more creative projects than is humanly possible. Cinnamon and Cigarettes is her first novel; her short story, “Bottom of the River,” was published in Torquere Press’ Twisted Fables anthology in February 2016.