Review: "Waiting in the Wings" by Melissa Brayden 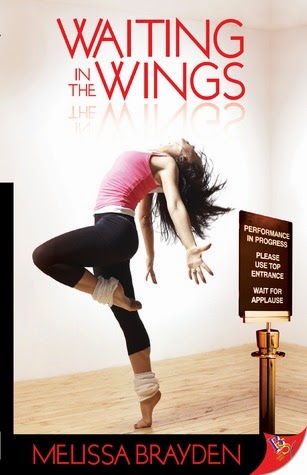 Waiting in the Wings was Melissa Brayden's debut novel (and the second one that I've read), released in 2011, and has received countless positive reviews from my fellow bookaholics out there. And yes, this is me, hopping on the bandwagon. I may be nearly three years "late" but I'm a firm believer that it's never too late to fall in love with a book. ^.^

After graduating from college, Jenna McGovern finds herself with the opportunity to audition for a touring Broadway show. She is cast as one of the supporting cast members and becomes friends with the lead, Adrienne Kenyon. Jenna is attracted to Adrienne but doesn't think she has a shot in hell, believing Adrienne to be straight. When Adrienne clears up that particular issue, she and Jenna begin a romantic relationship.

Everything seems to be going well in Jenna's life--she's part of an amazing stage production, she's made new friends, and she's in love. However, when she's made another career-boosting offer, Jenna is at a crossroads. Does she choose to be with Adrienne in New York or does she take the offer in Los Angeles? Once she makes up her mind, her life changes and a sacrifice has been made. Four years later, she's forced to confront her past and see what she's been missing all this time.

I read Waiting in the Wings in one sitting and found myself feeling a range of emotions throughout the book. You know a book's gotten to you when you're verbally assaulting the characters as they make certain decisions in parts of the story. Hahaha! The characters felt real and were easy to relate to. There may be a four-year gap in the story but you don't feel like you're losing much when it makes the jump. You quickly get an idea of what happened without having to be told in too much detail.

I loved Waiting in the Wings and it's currently my favorite Melissa Brayden book. ^.^ I'm giving this wonderfully written romance five stars out of five! It's one of my best reads for 2014 and highly recommend it to other bookaholics. You may even find yourselves wondering what you would have done if you were in Jenna's shoes and when that happens, you'll know that the book has affected you as much as it did me. ♥

You can buy Waiting in the Wings and Ms. Brayden's other books on Amazon | Barnes & Noble.