Review: Fixed on You, Found in You, and Forever with You by Laurelin Paige (Fixed #1-#3) 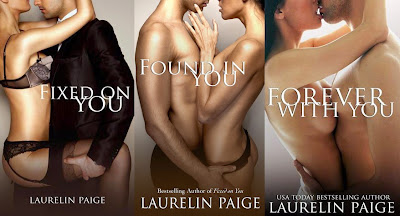 Fixed on You, Found in You, and Forever with You are the first three books in the Fixed series by Laurelin Paige. I think this was originally planned as a trilogy but with the release of the fourth book, Hudson, a companion novel told from the point of view of the male lead character in the three books, it has expanded somewhat. However, since the fourth book is a re-telling of the events in previous releases, although it does include a few extra scenes, and the story does end in a more than satisfying manner with the third book, this review will cover the original trilogy. It just seems simpler to review all three books instead of each one individually. ^.^ Hudson will get its own review once I finally get around to reading it. ♥

At first glance, the first three books may appear to have joined the trend of über rich alpha male lead characters but the trilogy sets itself apart by having a female lead character with a record of stalking and obsessiveness with the men she dates and, more importantly, having a twist that doesn't fully come to light until the third book! I'm one of those people who likes trying to figure out what the twist of a book is very early on and I found myself changing my theories from the first book to the second to the third. I love books that keep me on my toes and these three definitely did exactly that!

Alayna Withers is a great female lead, what with a good combination of sass, beauty, brains, and heart. She knows when to push back, when to stand her ground, and when to back off. She brings an alternate perspective and much-needed light to the male lead. You see her struggle to control her actions and reactions towards him but realize early on that it's a futile exercise because there's a connection between them that isn't easily ignored.

Hudson Pierce... Le sigh. ^.^ Goodness, what is with these dominant and gorgeous millionaires/billionaires that have some deep, dark secret that they're hiding that is irresistible to readers? I know Hudson is a fictional character but I fully understand why Alayna is drawn to him. Heck, if he were an actual living, breathing person, he would probably need constant protection from the hordes of women after him. He appears detached and untouchable but once he meets Alayna, his world is changed forever.

Alayna and Hudson meet and fall in lust but Alayna refuses to pursue anything because of her past. However, Hudson makes her a deal she simply can't say "no" to--become his pretend girlfriend in order to get out of a forced engagement to one of his oldest friends in exchange for the complete payment of her debt. Soon enough, the relationship doesn't feel fake and lust evolves into something more for both of them. Just when you think everything's peachy keen with them, someone desperately tries to destroy their fledgling relationship. Secrets that were kept are revealed and what shocking secrets they were, making both Alayna and Hudson wonder if there's any hope for forever for either of them.

I didn't want to give too many details and I most definitely won't give away the twist in the story. If you like your male lead characters who appear cool, calm, and collected but will steam up your reading glasses and your female lead characters who refuse to simply roll over and do everything they're told to, then give the Fixed trilogy a whirl. It's a sexy read with a mix of intrigue and drama. Overall, I'm giving the three books a combined rating of 4.5 stars. ♥

Buy the Fixed bundle and Ms. Paige's other books on Amazon | Barnes & Noble.