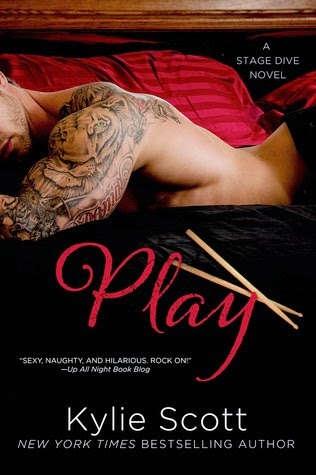 Play is the second book in the Stage Dive series by Australian author Kylie Scott and can be read as a standalone BUT if you do intend to read the entire series, you'll need to read it in order so that you don't end up with spoilers regarding the other stories. ^.^ This follow-up has Stage Dive drummer Mal Ericson and good girl Anne Rollins in the spotlight and you best be warned: Play is best read in the privacy of your home lest you be thought certifiable if you read it in public because there are lots of scenes and one-liners in this book that'll have you laughing like a loon (or giggling as quietly as possible or snorting out loud, depending on what kind of laugher--yes, I know that isn't an actual word--you happen to be). ♥

Mal is a rock star with a certain quirkiness about him that, when matched with his blatant sexiness, is difficult to resist. Just ask Anne, who after one meeting with him, finds herself becoming his roommate AND "girlfriend". If this were some ordinary guy, I would have been apprehensive but the fact that Anne was and is a fan of Stage Dive's and has always had the hots for Mal made it more understandable why she seemed quick to agree to Mal's plan, not to mention the whole make-Reece-see-what-he's-missing angle that sweetened the deal.

Reading the synopsis had me thinking that Mal asked Anne to be his fake girlfriend for the sake of his public image but upon reading the book, the reason behind it was heartbreaking and shows that Mal is more than just the easygoing guy everyone sees on and off the stage.

The play (pun intended) between Mal and Anne is often hilarious but there are definite moments of sweetness. Even with their unlikely beginning as a "couple", you know that it's only a matter of time before faking it turns into something very real. There are times that Mal was a complete ass but Anne always seemed to be able to see beyond all his faults (and believe me, he has some really glaring ones) and to understand him better than even those who have known him longest.

I'm giving Play 4.5 stars and would happily recommend it to anyone craving for a rock star romance with more than its fair share of hilarity and a dash or two of drama. ^.^ When you decide to get yourself a copy of this book, make sure to grab its predecessor, Lick, and its successor, Lead, both of which I've had the pleasure of reading and will be posting about as a review re-post and a new review, respectively. ♥

You can buy Play and Ms. Scott's other books on Amazon | Barnes & Noble.