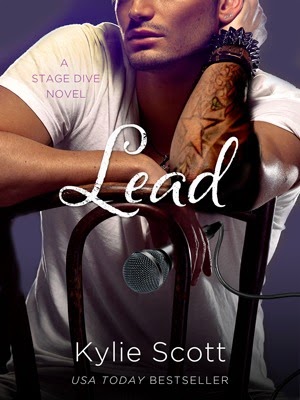 Lead is the third book in the Stage Dive series by Kylie Scott and follows the lives and loves of the members of a famous rock group. Fans of the series have been waiting to learn more about the lead singer of the group, Jimmy Ferris, a man who has been battling his demons since the first book. He is partnered with Lena Morrissey, his new personal assistant who refuses to be sucked in by Jimmy's good looks nor be intimidated by his less than pleasing personality.

Jimmy is not the easiest man to work for or live with. Just ask his latest personal assistant, Lena. Jimmy doesn't seem to have a very high tolerance level when it comes to his assistants but Lena is different. She doesn't give in to his domineering presence and is able to stand her ground when she feels he's doing more harm than good to himself. Begrudgingly, Jimmy does see Lena as an asset to his life both professionally, as his assistant, and personally, as his friend.

When Jimmy and Lena cross the line between being employer and employee to something more, it isn't a simple "and they lived happily ever after" for them. Things get very complicated and there's some confusion regarding how both Jimmy and Lena view their new relationship. Things come to a head and Lena pushes Jimmy to do something that forces them both to re-think if blurring the lines was worth it after all.

I loved the back and forth between Jimmy and Lena as well as the pacing of the story. This didn't feel rushed or forced and the progress of their relationship seemed realistic. I found myself laughing at certain points but there were also times that I was frustrated with the way Jimmy was acting. I mean, come on, man! Get with the program, open your eyes, and buy yourself a sensitivity chip! Chapter nineteen was my favorite. It had me swooning and the images in my head were enough to keep me grinning like a nut until the end.  ^.^

Lead is officially my favorite book in the Stage Dive series and I'm feeling that it'll be rather difficult to top Jimmy and Lena's story...but maybe the final book, Deep, will rise to the challenge, especially since it seems the series just keeps getting better with each book published. ^.^

I'm giving Lead five stars and have added it to my list of favorite reads for 2014. Grab yourselves a copy of the three books in the series so far and have yourselves a rockin' good time with Stage Dive's hotties, bookaholics. ♥

You can buy Lead and Ms. Scott's other books on Amazon | Barnes & Noble.