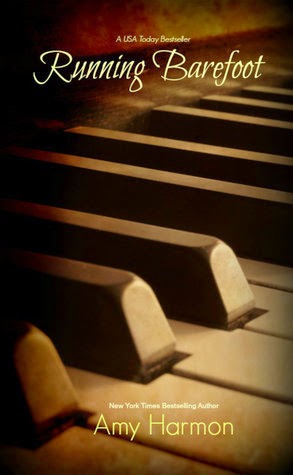 Running Barefoot is one of those beautifully written books that you may need to invest time in because it is rather long (over 400 pages). However, let me tell you that it truly is a remarkable book and not your run-of-the-mill love story, so consider the time you put in to be well spent.

Josie Jensen's life isn't ordinary. She's experienced loss and has felt responsible for her family at a young age, even though this was something that was not knowingly put upon her shoulders. When she discovers music, she becomes even more extraordinary, becoming a prodigy of sorts. Her life then revolves around her love for her family, her music, and her books...that is, until she meets Samuel Yates, who, just like her, is anything but ordinary. They strike up an unexpected friendship and 13-year-old Josie and 18-year-old Samuel become each other's support system and sounding board. The bond they share is special but Samuel is very much aware of the fact that he's five years older and anything more than friendship will be frowned upon by the people around them.

When Samuel leaves town after graduation to join the military, he leaves behind a sad but hopeful Josie. Letters are exchanged in the beginning but then, as the years go by, it seems as if Samuel has drifted away from Josie and she, in turn, begins to allow herself to fall for someone else. When tragedy strikes, Samuel and Josie cross paths again, but this time, their roles are reversed and their time spent apart is a dark shadow lingering over whatever future they may have.

This is a poignant story that deals about love, loss, forgiveness, family, and finding oneself. I liked that it wasn't about two young people who fell in love and the only thing that they had to deal with was their age difference. The second half of the book also didn't have a cookie cutter feel to it, meaning there wasn't this automatic reconciliation between Josie and Samuel. There was work involved and isn't that how it is in real life as well? ^.^

There were moments that I felt the story become more about the reader needing to learn specific lessons about life in general. While I love books that provide a lesson, moral or otherwise, I want to be able to learn or feel it for myself. I'm not a huge fan of being preached to but let me stress that this doesn't happen throughout the whole book so it wasn't like it bothered me from start to finish.

Overall, Running Barefoot is a really good book and gets high marks for creativity and execution. Amy Harmon is a gifted writer and I'm looking forward to reading her other books soon. ^.^ I'm giving Running Barefoot four out of five stars. ♥