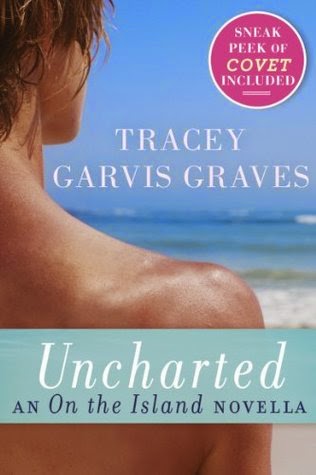 Uncharted is the companion novella to one of my favorite books of all time, On the Island. Tracey Garvis Graves has done it again, seamlessly weaving a tale that reels you in and keeps you hooked onto everything that's going on with the characters. The fact that fans of the original novel are able to still have their fill of T.J. and Anna is an added bonus. ^.^

Owen Sparks feels he has had enough of his seemingly enviable life and decides what only a supposedly eccentric millionaire like him would consider necessary--moving to an island far from the rest of civilization. He no longer wants to deal with people who simply kept wanting more from him or kept wanting him to make more for them.

Everything seems to go according to plan until he meets Calia Reed on one of his rare visits to the mainland. After one conversation with her, he impulsively invites her back to the island and she, in turn, brings along her younger brother James. Owen begins to appreciate being with other people again and his relationship with Calia develops further.

When tragedy strikes, they are forced to go back to the real world and Owen makes a promise to Calia. Fate intervenes and a decision that Owen later makes proves to be one that will affect more than just his own life.

I didn't want to give too much away but I will say that reading this novella (which is actually a quick read) will provide readers with a better understanding of certain things that occur in the first book. Is it absolutely necessary that you read Uncharted after reading On the Island? Not really. However, I do highly recommend that you do, simply because I feel that it's worthy of the time you'll put into it.

I'm giving Uncharted five stars. Make sure you read this AFTER and NOT BEFORE On the Island. Tracey Garvis Graves is two for two so far and I'm looking forward to reading her other books in the future. ♥

You can buy Uncharted and Ms. Graves' other books on Amazon | Barnes & Noble.