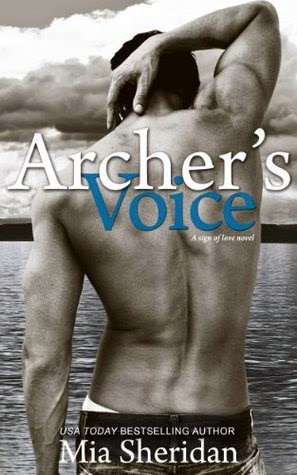 Oh God, Archer, I thought, my heart squeezing tightly in my chest. How do you teach a man who has lost everything, not to fear it happening again? How do you teach a person to trust in something none of us can guarantee? This beautiful man that I loved looked so broken, sitting before me expressing his love for me. Expressing his devotion. I wished with all my heart that that could be a happy thing for him–but I understood why it hurt.

Archer's Voice is the fourth book in the A Sign of Love series of novels by Mia Sheridan but can absolutely be read as a standalone. I've read the three books that came before this one and I must say that Archer's Voice is, without a doubt, my favorite. The story here is much richer and the characters far more interesting. From the first page 'til the last, I found myself invested in the tale of Archer Hale and Bree Prescott.

Both Archer and Bree are saddled by pasts that are scarred by one night in their respective lives that they aren't able to totally escape from. Archer has no friends and the family he does have treats him the same way the rest of the town does--like an outcast. Bree is trying to get away from her life in the city, needing some peace and solace, even if only for a couple of months.

The lead characters do not experience one of those instant love moments that have become rampant in a lot of books these days and I'm quite thankful for that. Their relationship begins with an accidental meeting and then, thanks to Phoebe, Bree's adorably precocious dog, and Bree's persistence, they embark on a fledgling friendship that blossoms into something neither was expecting but both actually needed.

Archer and Bree are wonderfully crafted characters who endured traumatic experiences when they were younger. Throughout the book, we're able to see the growth and development as individuals and as a couple. Their relationship doesn't feel rushed or forced, allowing them to build a foundation of mutual trust and respect before love begins to set in. They didn't need spoken words but were able to communicate what they thought and felt. ♥

At the end of Chapter 34 and at the very beginning of Chapter 35, I thought the story was going to close on an unexpected note. If it had, I wouldn't have complained because I love when the unexpected happens in a story but I AM happy that things turned out the way they did once I got past the first few paragraphs. Regardless of how things would have ended, I would have been a satisfied reader. Yes, I loved the book THAT much. ^.^

I'm giving Archer's Voice five-plus stars and would highly recommend it to my fellow bookaholics out there. This is definitely one of my favorite reads for 2014 and consider it author Mia Sheridan's best work so far. ♥

Edit: Archer's Voice was re-released on 01 November 2016 and while it remains the same novel, there was a bonus scene told from Archer Hale's point-of-view. That alone had me buying the new edition on Kobo, because I can't purchase any ebooks from the new publisher, Forever, through Amazon (weird, I know), even though I already had the original indie-published book from Amazon.

That bonus scene? It's one of the more pivotal scenes in the novel told and fans will more than appreciate finding out how Archer saw and felt everything on his end. Was it worth the 99 cents? Hell, yes. And Archer's Voice still remains my favorite Mia Sheridan book and what I consider her best work ever.

P.S. The purchase links have been updated since you won't be able to access the old ones.

Ah, God, if she only knew how much I wanted her here, how with her was the only place I wanted to be, would it scare her? My heart picked up in speed. It scared me. Sometimes I felt as if the words I wasn't saying to Bree were so loud in my own head, she might be able to hear them clear across the room, though I hadn't–couldn't–make a sound and hadn't lifted my hands.