Review: "How Sweet It Is" by Melissa Brayden 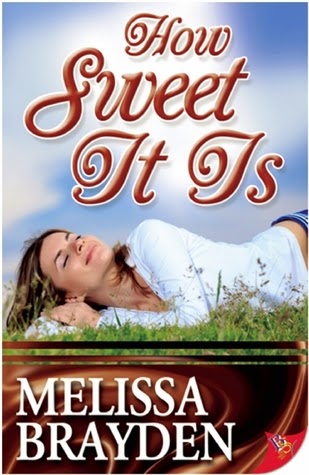 How Sweet It Is is the first book by Melissa Brayden that I've had the pleasure of reading and suffice it to say that I went ahead and read all her other currently available work and am now a certified fan of hers. ^.^

"You undo me every time. You know that?"

Molly O'Brien lost the love of her life, Cassie, four years ago but has gone on with her life, staying close to her in-laws and continuing the now floundering bakeshop her father started with the help of her eccentric crew of helpers. She decides it's time to start dating again but seems to end up with nothing more than a handful of first dates that don't really lead to anything too promising. And then her sister-in-law Jordan drives back into town...

Jordan Tuscana has always tried to live her life according to her terms, refusing to be like her late sister, Cassie, and her brother, Mikey, and joining the family practice, and becoming a film producer instead. She returns to town after having stayed away for years, needing a break from work, and faces more than pressure from her family to return to the fold.  She's

There's an underlying attraction between Molly and Jordan but it goes beyond that as the story and the characters develop. Jordan has always had a crush on Molly and while she would love nothing more than to see where a romantic relationship with her sister-in-law would lead, Molly is hesitant, afraid of how the rest of the Tuscana family would react and not being able to move on from the fact that Jordan is Cassie's sister.

Aside from having to deal with whether or not to pursue the feelings they have for one another, both Molly and Jordan are faced with life-changing decisions they may need to make. Molly's bakeshop is having difficulty competing with bigger named stores even though her baked goods and coffee are much better and must decide if she'll close shop or not. On the other hand, Jordan is torn between going back to what she's been doing in terms of work or taking a risk and striking out on her own as a film producer.

This book tells a captivating story and is composed of unforgettable characters. There are some really funny moments but also a few poignant ones that will tug at your heartstrings. There's a great dynamic that exists among the characters, especially between Molly and Jordan, two women who you want to cheer on because they deserve to have their happily-ever-after.

"I think we undo each other."

Yes, How Sweet It Is is a love story between two women, and while female-female (FF) stories may not be everyone's cup of tea, it is a beautifully told story worth reading. Like I said at the beginning of my review, this book made me sit up and take notice of its author and Melissa Brayden certainly knows what she's doing and she does it well.

How Sweet It Is get 4.5 stars out of five and I'm more than happy to recommend it to my fellow bookaholics, whether you're a fan of lesbian romances or not. ♥

To learn more about the magnificent Melissa Brayden here.

You can buy How Sweet It Is and Ms. Brayden's other books at: Amazon | Barnes & Noble