Review: Undeniably His by Emery Jacobs 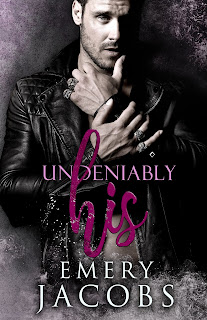 Undeniably His was originally part of the multi-authored Begin Again anthology which was released in January of his year. Then titled Something Beautiful, its inclusion in that collection served more as a precursor to what I expected would be a full-length version of it given that it was obvious readers were not getting the full story. Six months later--and formerly given the title Until Him prior to release--and we finally get Emmie Carmichael and Beau Matson's story about trusting your heart will find its way to the one person it was meant to be with.

Emery Jacobs's standalone romance finds Emmie Carmichael moving on with her life. Ten years of marriage wasn't enough to keep her husband from getting another woman pregnant, but Emmie refuses to dwell on the life she once had. Over a year since the divorce and she knows her friends are right when they suggest she find someone new. She isn't sure, however, if Beau Matson is the right guy for her. Sure he's hot and good-looking, but he's keeping something from her, and once she learns the truth, will the fragile trust she has in him break?

I've enjoyed the author's writing in the past and have kept tabs on her releases since her debut a couple of years ago. Her latest release definitely had a number of surprises that I didn't see coming, especially if I'm basing it on the handful of chapters that were in the Begin Again anthology. I don't want to say exactly what secret it is that Beau's keeping from her, but the clincher comes much later in the story, one that I guessed but was still shocked when I was proven right. Emery Jacobs does well with this one. 4.5 stars for Undeniably His. ♥

Purchase Undeniably His on Amazon.