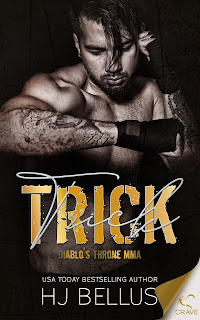 Trick is the third novel in HJ Bellus's Diablo's Throne mixed martial arts romance series and features the story of Trenton "Trick" Jameson, an MMA fighter and former world champion with the moniker "Country Boy Brawler". After graduating from high school and with the encouragement of his mother, Trick left behind the only life he knew and all of his father's expectations in his small hometown in Idaho in order to pursue his dreams. Under the guidance of his coach and with the support of the family he found in the Diablo's Throne Gym. Years later, he decides to go after another dream--earning his college degree--and it's there that a whole new dream falls into his lap: Mackenzie Graham. Mack is unlike any other woman that Trick's ever met; she has an issue with coordination, prefers to ride a bicycle, and lives in her elderly neighbor's garage apartment. She seems shy and insecure, but she's also intelligent and beautiful. Trick wants to scale each one of Mack's walls, but will Mack, whom some saw as nothing but trash, ever see herself as the treasure Trick believes her to be?

I liked this story of two opposites finding love with each other. While Trick and Mack may not have appeared to have all that much in common, they were actually two people who wanted to be seen and accepted as someone more than what others thought of them. Trick's father's expectation that his only son take over their ranch and Mack's abandonment in a trash bin forced them to make certain choices that both benefited and hurt them. Their romance had its quirks, but it was nice seeing Trick coax Mack out of her shell and became a far more confident and self-assured woman in the process. Of course, the usual suspects--aka Cruz and Layla Felix and Jag and Sunni...umm...okay, I still haven't uncovered what their last name is, plus Dexter Diaz, better known as Boss and the owner of Diablo's Throne--are all present and accounted for. There were a number of things that were kind of unresolved or introduced, and I wonder if Riot will be getting his own book, if Boss will be paired with the one he was with here, and if there's more to the Devil's Sinner angle. Hmmm... Trick gets four stars. ♥

Read my reviews for the Diablo's Throne series: