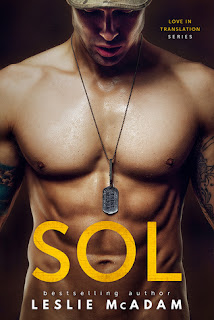 My introduction to Leslie McAdam's writing came by way of All About the D, which she co-wrote with Lex Martin. That romantic comedy standalone left me with mixed feelings, so when the opportunity to experience McAdam's writing on its own came about, I decided to jump in with both feet--one for each book in the author's Love in Translation series. Book one is entitled Sol, and it's the story of Trent Milner and Danika Anderson. Right before Trent was to head off to boot camp with his best friend Degan Anderson, the eighteen-year-old decided to throw caution to the wind and kiss the girl he's always had feelings for--his best friend's twenty-two-year-old older sister Danika. It was a kiss neither one of them would ever forget, but life moves on for both, with Trent fighting a war and Dani heading off to explore the world. When she comes face to face with the boy who kissed her, she quickly realizes just how much of a man he's grown up to be. But the news that Trent has brought her all the way to Granada, Spain could force them both to live with darkness before seeing the light.

This was a pretty good read, one that had a whisper of a promise with that kiss that the main characters shared, but then required a devastating event in order for them to cross paths again. Trent was the best thing about this book. There was the quiet intensity to him, even when he was only eighteen in those first few pages of the book, and it was an intensity that he carried with him all throughout. Degan was my second favorite thing, but I won't say too much about him because I seriously don't want to spoil the book for anyone who has yet to read it. Dani, however, nearly spoiled this for me. I'm sorry but I simply didn't like her. I tried; I really, really, REALLY tried to find at least one thing about her that I felt I could connect with but to no avail. Considering she was older than Trent and tried to make it seem as if she had this whole love, peace, and harmony vibe going on, her actions spoke way louder than her words, and I simply wasn't a fan. All things considered, I did like the story that the author was trying to relay and Trent nudges Sol to a 3.5-starred rating. ♥