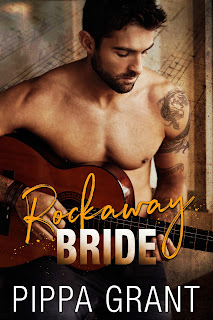 Pippa Grant is a new-to-me author, and her newest standalone was one heck of a fun-filled introduction to her writing! Rockaway Bride is the story of a rock star named Dax Gallagher who's had a string of bad luck as of late. His band isn't bringing in the same crowds it used to and it's dealing with a slew of issues that Dax can't quite wrap his head around. The clincher, however, is when one man dares to steal his hard-earned money from him. So, what's a rock star to do? Why, kidnap the man's bride-to-be, of course! And that's how Willow Honeycutt finds herself being held hostage by Dax. Maybe it's kismet, especially since she's been wondering about whether or not she was meant to marry. Maybe this was the perfect opportunity for her to let her adventurous side loose. She's got a bucket list to work her way through and maybe if she writes one for Dax, they can have even more fun together. As Willow opens herself up to new things, Dax finds himself opening his heart up to this quirky woman who's brought far more into his life than he expected. She was a means to an end...but what if she means...more?

I seriously enjoyed this romantic comedy read! There are quite a few supporting characters who I think have been main characters in the author's previous releases, but you can still safely and easily read this one on its own without having to read the other books. Of course, if those books are as good as this one, I may need to add them to my never-ending to-be-read list. I really liked Dax and Willow and while their love story seems to be a series of misadventures that lead to them falling madly in love with each other, it made for the kind of read that elicits smiles and laughter at various points in the book. These two were super entertaining, and they've clearly got their chemistry down pat. Of course, let's not forget that there are certain circumstances that led to Dax and Willow's paths crossing, but once these two ARE together, it's pretty obvious that there's nowhere else they'd rather be than each other's side. With great character development and a story that lives up to its promise of being a rom-com, I would happily recommend Rockaway Bride to anyone searching for a light and fun read. This gets five stars. ♥