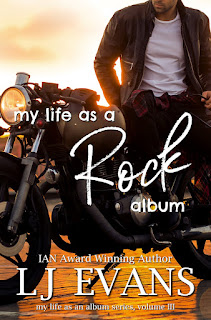 My Life as a Rock Album is the third installment in the My Life as an Album series from LJ Evans, and because I adored the first two novels, I've been excitedly awaiting to get my hands on this newest one. The story Evans tells here is more of a second-chance romance, one told from the third-person points of view of the main characters, artist Seth Carmen and blogger and college student PJ Hensley. When he first sees her during an art showing, he can't help but follow her, noting how much she looked like the girl he loved--the girl who left him. They don't get off to the best of starts, and he knows the impression he left on her had the opposite effect of the one she left on him. Once they got to know each other, they fell hard. However, as in love as these two were, the time came when PJ had to make a choice: to continue to be stifled by Seth's possessiveness or to breathe freely but away from him.

This book left me torn. I loved books one and two--My Life as a Country Album and My Life as a Pop Album--so expectations were high on my end for book three. I did like the story about two people who were very much in love but were somehow still lost, needing to find their footing without having to rely on the other person. But what if home was something they only found with one another? They both have their issues and my heart went out to both of them as they went through their struggles. So, why am I torn? I wasn't a fan of the letter writing method employed to tell Seth's part of the story. I'm not against the method in general, but as someone who still loves to write letters to family and friends, the way it was done here did NOT feel like they were letters at all. The story and characters get five stars; the presentation gets three. That's an average of four stars for My Life as a Rock Album. ♥

Read my reviews for the My Life as an Album series:

Pre-order My Life as a Rock Album on Amazon.