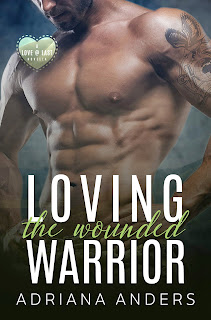 I am absolutely smitten with this series of novellas Adriana Anders has created! I loved her Blank Canvas trilogy but I confess that I've become rather addicted to these shorter reads of hers. They don't read like quickies in that readers are treated to developed stories and characters. In the second novella, Loving the Wounded Warrior, we have two main characters who have a bit of interesting history between them. When they were in high school, O'Neal Jones was Kurt Anderson's best friend's younger sister, but neither one would have ever thought they'd be tied to one another when she was an inquisitive fourteen-year-old looking for a scoop and he was an injured seventeen-year-old football star. Years later, the last thing either of them expects is for their paths to cross again as Kurt pushes an empty wheelchair up Mount Saint Jacob and O'Neal nearly crashes into him. While she's now a grown-up version of the intrepid reporter she was in high school, Kurt is far from the football player he once way. He's a former Marine and one look at him and O'Neal smells a story worth writing about. The question is, will this wounded warrior share his story or will he continue his sad journey in silence?

I admit that it took a few chapters for me to warm up to O'Neal, and my wariness with her stemmed from what seemed to be her dogged persistence to get to the bottom of why Kurt was making his way up the mountain with an empty wheelchair. I get it--it was her job, but I couldn't help but sympathize with Kurt, especially since it was pretty obvious the guy wasn't interested in sharing his story just when this unexpected reunion had taken place. And yes, I really did like Kurt, although I confess that the one thing he had in common with Zach Hubler from the series starter, Loving the Secret Billionaire, was unexpected. I'm also not sure if that's going to be what ties all three of the books in the series together, but hey, you won't hear me complaining. But back to the romance between Kurt and O'Neal! These two were the kind of pair that had my brow furrowing, trying to figure out if they'd actually click and then, in the middle of the story, they simply click. There were a couple of surprises regarding their story, and I appreciated those little twists because they made this one an even more interesting read. I enjoyed Loving the Wounded Warrior, which gets four stars, and can't wait for the third one! ♥

Read my reviews for the Love at Last series:

Loving the Secret Billionaire (book one) - five stars - My Review