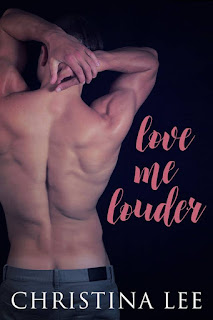 Christina Lee is a go-to author for me and with good reason. She's always been able to write the most heartwarming of love stories, whether M/F, M/M, or M/M/M. With her latest standalone, Love Me Louder, she's paired two men who had been in each other's orbits for months only to truly begin to have a better understanding of one another over one weekend. Now, that may sound simple enough, but twenty-eight-year-olds Noah Dixon and Will Crossen lives and stories are complicated. And you know what? That's what made this such a superb read.

It's been years since one event changed Noah Dixon's life, and he continues to live with the visible reminder of what happened. He's living his life on his terms, including working at Home and Hearth, but when he receives an invitation from his closest friend to help celebrate a birthday and a surprise proposal, Noah's reminded of something else--the idea he may never have a partner in his life. After all, who wants to be with a man with scars? He doesn't want his friends to pity him, which is why Noah decides to get himself an escort for the weekend away.

William Crossen's left behind his life in the theater to start over. His job at a Home and Hearth is stable, but he needs extra income in order to continue providing his mother with the kind of care that she requires. That extra income comes in the form of Max, Will's alter ego as an escort. When a new client requires him to spend the weekend at Fire Island pretending to be boyfriends, Will knows the pay will be worth being away from his mom for a few days. What he doesn't expect, though, is that his new client "James" is none other than his co-worker Noah.

Love Me Louder was such a lovely read, one that had my heart squeezing in empathy for both Noah and Will at certain points in the story. These two were stuck, caught in the circumstances of their respective lives, and then they get together and it's almost as if finally getting to know one another opened new avenues for them, both as two separate people and as a new kinda-sorta couple. Christina Lee is an author who knows her subject matter well; it's that knowledge merged with a whole lot of heart and heat that's made her a favorite of mine. Five stars. ♥

Learn more about about Christina Lee.

Purchase Love Me Louder on Amazon.