Review: I Don't by Andrea Johnston 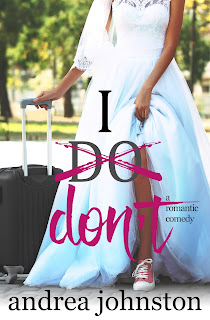 What's a bride-to-be to do when she catches her fiancé cheating on her a little over a week before their wedding? Why go on a road trip with the first boy to break her heart, of course! Well, maybe that isn't what all women in that situation would do, but in Andrea Johnston's new standalone romantic comedy, I Don't, that's exactly what Whitney Wheeler does. She needs time to wrap her head around what the man she loved has done to her. She's been planning her wedding since she was a little girl and her boyfriend of three years turned fiancé was the perfect fit for her. He had all the qualities she demanded in the man she was to spend the rest of her life with. But after what he did, she's at a loss. Her best friends think she needs a breather, something to take her mind off recent events. That "something" turns out to be a stripper--a stripper named Lucas DeCosta, the boy she crushed on in high school only to end up getting crushed by his thoughtless actions. Where he was cute before, he's hot as hell now. He's the past but her present isn't looking too great either. Can Whit say "I do" to a future with Lucas?

This was a fun second-chance romance read, one that provided that lightheartedness that I needed this weekend. Whitney and Lucas's reunion was memorable, and while unconventional, it did set the precedent for everything to follow in their story. I really liked Lucas; he was this guy who made no apologies for the choices that he made in his life, even if people didn't automatically and fully comprehend why he did what he did. That doesn't mean that he was irresponsible. If anything, he was focused on his dreams in life and did whatever was necessary--but still legal!--to get to where he wanted to go. For the most part, Whitney was likable enough main character. Admittedly, I may not have been a fan of her waffling nor her tendency jump to certain conclusions when it came to Lucas and his job as a stripper while still seriously considering to push through with her wedding even after she had caught her fiancé getting busy with his secretary. Funnily enough, the ones who had the most sense here were some of the supporting characters, particularly their best friends. Overall, I Don't was a good four-starred read. ♥