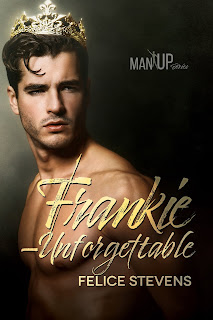 When I first encountered Frankie Marone in the first Man Up book, I thought his story was going to go in a wholly different direction than where it was beginning to head in the second book, which leads into the third one--his story. I initially thought that Frankie would be paired up with someone else, given his tumultuous relationship with Aaron Cooke. But Felice Stevens had a story to tell, and I'm glad that she took this book in the direction she did because Frankie and Aaron's love story was far from easy, but that's what made it rewarding.

Frankie Marone got his heart broken by Aaron Cooke a year ago. They may have been together for three years, but while the relationship may have started like a fairy tale, it had a nightmare of an ending. One year later, Frankie decides to give Aaron another chance much to the shock and disappointment of those nearest and dearest to him. How can Frankie make them understand just how much Aaron means to him and why he believes the man he still loves has changed? How will Aaron convince naysayers he's worthy of Frankie's love?

While I admit that I wasn't a fan of either Frankie's or Aaron's going into the book, by the time I put my tablet down, I was a complete goner for their story. Don't you love it when an author writes a story that allows you to see that while the main characters are flawed and they have their stumbles, they more than redeem themselves. It isn't easy nor is it pretty, but both Frankie and Aaron were meant to learn a thing or two with all the hurdles that were set before them. With a memorable cast and a touching story, Frankie - Unforgettable gets five stars. ♥