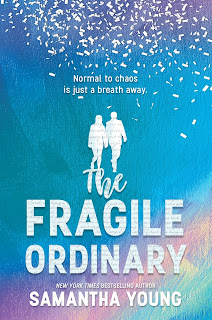 Was in adventure, was in the extraordinary.

But I've learned that time is not so forgiving,

And the real beauty of life is in the fragile ordinary.”

Anyone who thought that The Impossible Vastness of Us was a fluke needs to dive into bestselling author Samantha Young's newest young adult (YA) release. The Fragile Ordinary is the story of sixteen-year-old Comet Caldwell, a girl with parents who were too busy with each other to barely notice their own daughter and with friends who she couldn't help but feel were leaving her behind. Her life is ordinary, so she relishes the stories she finds in the books she reads. Between the covers were far more interesting characters whose lives were filled with journey and experiences Comet could only imagine. Then came the first day of her Fifth Year, and in came fellow sixteen-year-old Tobias King. The boy from the other side of the pond is mesmerizing, and his mere presence captures more than Comet's attention. On the surface, Tobias is the bad boy to Comet's good girl. They shouldn't have any sort of connection...except they do. Unfortunately, not everyone is as thrilled by Comet and Tobias evolving friendship, and the two teenagers will be forced to make a choice between giving up or finally growing up.

June's been a great month for me as far as YA reads are concerned, and Samantha Young's latest standalone lands rather comfortably among those very few and select novels that I loved and left a positive and lasting impression on me. There were aspects about Comet's personality and her own story that brought to mind my own memories back in high school and as a teen trying to find my own place in the sun. My heart went out to her--for the lack of attention from her parents and the almost awkward way that she was among her peers. And while Tobias was the boy who would change her world, he's not necessarily the boy-next-door type of guy. But see, that's what I loved about this book. Neither Comet nor Tobias are flawless and idealistic individuals just a couple of years from adulthood. They're young, impressionable, and already have cracks in their psyches. However, throughout this tale, it's Comet's resilience and later self-confidence that shines brightest, showing she is indeed extraordinary, as we are all capable of being if only we allow ourselves to be who we truly are. Five-plus stars for The Fragile Ordinary. ♥