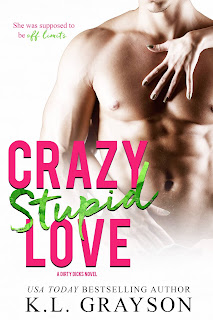 “You're not broken, just bent. We're all bent, Lincoln. Some of us worse than others, but being bent isn't a bad thing.”

She kisses the center of my chest and then puts her lips over my heart. “Good, because I like you just the way you are.”


I am crazy in love with this series! K.L. Grayson is surely and swiftly making her way onto my go-to authors list and I have her Dirty Dicks series to thank for that. it's three for three with the release of Crazy Stupid Love, the third full-length novel in the series, and this time around, we've got the falling-for-your-best-friend's sibling story of twenty-nine-year-old Lincoln Bennett and twenty-four-year-old Adley Allen, Rhett Allen's best friend and only sister, respectively (and whose own second-chance love story is told in the series starter, Crazy Sexy Love).

When Lincoln Bennett first saw Adley Allen, the rising star in the Professional Bull Riders was warned away by Adley's brother who just happened to be his best friend. She wasn't even twenty-one back then. So for five years, he kept his distance, until they both crossed the line. Now, they've kept their supposedly no-strings attached series of hook-ups a secret for the past six months. After all, Lincoln doesn't do relationships, not when he had a front-row seat to the implosion of his parents' marriage and the abuse they rained on him and his younger sister Chloe. Adley deserves a man who can give her the world, not one whose world is off its axis.

Lincoln's home life was the complete opposite of Adley's and his mother's parting words before she upped and left their family haunts him years into adulthood. He doesn't see himself as someone worthy of Adley's love, so he'll take what he can get from her. Once I got to know the Lincoln behind the guy who knew how to give Adley a good time, it's clear that his heart always puts those he cares most about first. Yes, he's made many mistakes, and yes, he's constantly afraid that he'll end up exactly like his father--drunk and alone--but his sister was always his top priority and now with Adley, he wants nothing more than to make sure that she's happy, even if she could end up with someone other than him. Gah! Lincoln gives the Allen boys a run for their money.

In as much as I loved Lincoln, I loved how much better he was with Adley in his life. The girl had heart and she had that Allen spirit that made her want to fight for the person she loved, especially since she saw exactly how good of a person Lincoln was. While the happy ending was a guarantee, I appreciated that there were a number of times that the story went in a direction that I didn't necessarily think the author would go and yet she did, making this book a far more interesting and enjoyable read. There are more Allen brothers who have yet to get their happily-ever-afters, although it looks like we get a hint of who one of them'll be paired up with. There's also Adley's best friend (whose story is part of a crossover collection) and Lincoln's sister and one of his closest friends. Dirty Dicks is the gift that keeps on giving. I can't wait for more! Five-plus stars for Crazy Stupid Love. ♥

Read my reviews for the Dirty Dicks series: