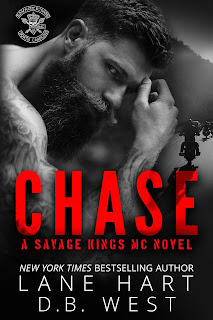 Chase is the first novel in the Savage Kings MC series penned by the wife and husband writing team of Lane Hart and D.B. West. It's also my first read from either author, and it proved to be a good read and an equally good start to this new motorcycle romance series. Hart and West kick things off with a second chance love story between Chase Fury and Sasha Sheridan, who were eighteen and very much in love when they decided to elope. He was a prospect in his uncle's club and she was heading off to college, but they knew they wanted to spend the rest of their lives together. It took a terrible accident to tear them apart, even as they continued to live in the same town.

Ten years later, Chase is now the VP in the Savage Kings, with his older brother Torin the club's president. Things appear to be amiss, and Chase can't help but react, refusing to be caught unaware and defenseless, choosing to go on the offense instead. This brings attention to the club, and there's one broadcast journalist that's got her eye on the story--his ex, Sasha. When she's put in danger, watching from afar isn't enough for Chase. Now, he's trying to protect not just his brothers but the only woman he's ever loved as well. But Chase's actions could very well be what causes a domino effect, one that will leave much bloodshed and precious lives lost. Will it scare Sasha away?

I liked the second chance romance as well as the hint of mystery plus all the action and suspense, all of which usually make up the requirements for an MC romance. Kudos to Sasha for being the kickass woman that she was, refusing to be set to the side and made to feel as if she couldn't take care of herself. I'm not a fan of a heroine who needs rescuing, and Chase, as protective as he was, recognized the independent and confident spirit that the woman he loved had. I'm very curious as to what may lay in wait for the club going forward, especially because there are certain major unresolved issues. Consider the other books on my to-be-read list! Four stars go to Chase. ♥