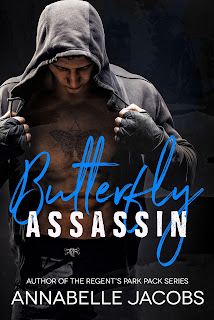 Set in the same Regent's Park Pack universe she created, Annabelle Jacobs brings fans and readers a new shifter story, one that packs a punch with mystery, a jab with suspense, and a tap or two with romance. Why all the fighting references? Well, this spin-off standalone--which I'm really hoping is just the first in a host of new books in the same universe--has a wolf shifter who takes part in illegal underground mixed martial arts fights. Nicknamed the Butterfly Assassin, twenty-six-year-old Aaron Harper's original intention in entering the world of MMA was to keep an eye on his closest friend's gambling, but he's secretly become addicted to the feeling he gets once he steps into the ring. He knows the fighting itself is illegal, but doubly so when a shifter is involved. Just when he decides to quit, three senseless murders have him squarely in the crosshairs the Shifter Crimes Task Force. Thirty-four-year-old Detective Sergeant Michael Archer isn't sure if Aaron is a possible suspect or an unwitting asset, but what he is sure of is that being attracted to the shifter would be a disaster in the making.

Annabelle Jacobs's Butterfly Assassin has the shifter goodness found in her Regent's Park Pack series, but this is a story that stands extremely well on its own. In short, you don't necessarily need to read the previous novels, although if you love reading M/M shifter stories, I'm going to highly recommend you check those four books out. What I loved most about this latest Jacobs release is the mystery aspect. Just like Michael, I had one particular person as my prime suspect, but when it comes to books that fall under the same genre as this one,  especially the truly well-crafted ones, you never know who truly is the "bad guy". There are a couple of twists in this book, but there's almost a subtlety to their revelation that caught me off-guard. Naturally, I appreciate that sort of thing because Jacobs kept me on my toes with the story itself plus the supporting characters--shifter and human alike--who left their mark, and I've got my fingers crossed that we'll be seeing more of those shifters sometime in the future. Butterfly Assassin is a wholly entertaining read, one that easily gets five stars. ♥