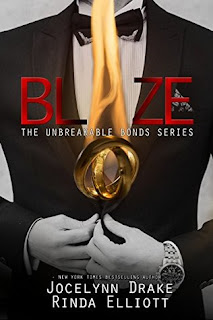 “Need isn't enough of a word for what I feel. Do you know, I wake every morning, remember where I am and who I love, and the joy that fills me is the brightest thing I've ever felt? That moment when I remember what I have—it's the best moment of my day.” He stopped, knowing his heart lay open and raw on his sleeve. “It's not all your damn money, or even the job I love. It's you.”


My introduction to Jocelyn Drake and Rinda Elliott's writing--whether as a duo or as individuals--was by way of Dantès Unglued, the first in the Ward Security series and the same book that got me hooked to both the rest of that ongoing series AND this writing partnership. The funny thing is that series is actually a spin-off of Drake and Elliott's Unbreakable Bonds series, which I had not read...until this week. Yep, all it took was the upcoming release of the fifth novel in the series for me to get off my butt and finally read the books that kicked everything off for this partnership. A book a day--and I haven't even gotten around to the companion series composed of short stories for each man that made up the foursome that was more family than a set of four best friends--and yeah, I admit it: I'm now really hooked on all things Drake and Elliott and there's more coming from both series, but more on that later.

Blaze is the fifth and latest novel in the Unbreakable Bonds series and I'm going to seriously suggest that you read the books in order. You could follow the reading order, as arranged on the Goodreads page for the series, but I've only read the full-length novels and those sufficed in terms of getting the back stories and the history behind the close kinship these four men--Lucas Vallois, Ashton Frost, Rowan Ward, and Ian Pierce--share. I'm still going to read the Unbreakable Stories collection later on since those have short stories and novellas that could provide more insight on the guys and their significant others, but if you're short on time--pun not intended!--you could stick with only the full-length books for now. They're not exactly quick reads, but trust me, you'll want to put in the time to read these because they're just THAT good. Lucas, Snow (Ash), Rowe, and Ian are worth it, so get a reading, people.

Now, back to Blaze... This had sex and romance plus mystery and suspense, and it made for a really fantastic read. I always love reading about how these men find love and a home with those they've fallen in love with, but I also love that the authors never fail to remind us that none of them lead the easiest of lives prior to becoming entwined in each other's. Also, as close as the four are, Lucas and Snow's friendship is on a completely different level, and seeing them head back to their hometown (and I'm using that term very loosely here because these two didn't have much of a home life to speak of) because of a plea for some help from Lucas's estranged sister was heartrending. Their past doesn't come back to haunt them--they confront it, but that doesn't mean that it's easier. The fact that they're now entangled in a plot to silence Lucas's niece Taylor forces these two to stay on their toes.

Naturally, where Lucas is, Andrei Hadeon can't be too far behind. If you've yet to read this book or the other books in the series, I suggest you look away because this might get spoilery. These two are set to be married in a matter of days when Lucas and Snow decide to go back to Oklahoma. While Lucas is hit with reminders of his past, Snow is bombarded by it, and seriously, my heart went out to both men, but I really want to give Snow a hug (though I think he wouldn't have appreciated it much if it came from me). Handling their present issues and commitments while also trying to manage recollections of the past may not necessarily sabotage the future of Lucas and Andrei, but it looks like Snow is going to need more of a resolution...aaand I'll leave it at that. Along with appearances from both Unbreakable Bonds and Rowe Security casts, Blaze was everything I hoped for and then some. Five-plus stars! ♥