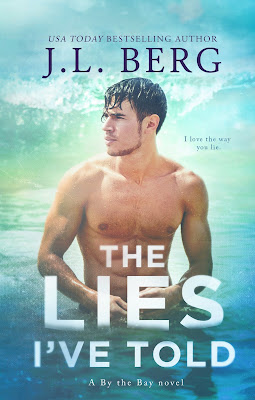 Everything was going according to plan...

After years of working my way up the corporate ladder, it was finally my time to shine. I was about to receive the promotion of a lifetime.
But just like that, my life was destroyed with a single career crushing email.
Now, I am headed back home to North Carolina, under the ruse of an extended vacation to help run the family inn while my sister is on maternity leave. After all, what is family for? Plus, a few days at the beach could definitely help uncomplicate this crazy life of mine.

Aiden is a guest at my sister’s inn. He’s wicked hot, a huge flirt and has one of the sexiest British accents I’ve ever heard. But beyond all that, I see a darkness in his soul, as if he’s carrying a great weight upon his shoulders.
I find myself pushing back my trip home to Florida in hopes that maybe I’ll look into those hazel brown eyes and finally see truth shining back instead of lies. That maybe he’ll stop running and tell me the truth for once.
But you know what they say about liars? It takes one to know one and I’ve been telling the biggest lie of all – I’ve fallen hopelessly in love with Aiden.
And isn’t that the scariest truth of all? 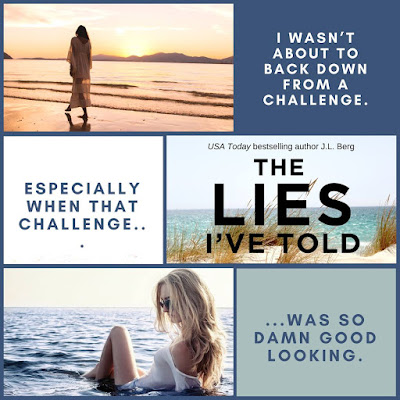 Read my four-starred review of The Lies I've Told. 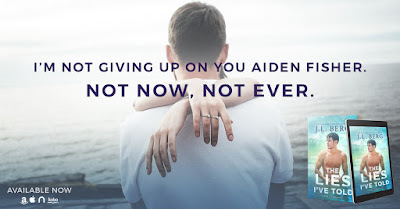 About The Lies I've Told
My eyes bolted open as sunlight from the windows glared down at me.

I sat up, quietly stretching as if I had all the time in the world.

Because I did, right?

No job. No responsibilities.

Breakfast for the guests!

I bolted out of bed, frantically searching for my clothes. Where were my clothes? I tried to think back to the night before, but it was blurry.

And then the hammering in my head began.

Shit, how much did I drink last night?

“Where are you running off to so early?”

The deep British accent had me stopping in my tracks.

I turned on my heels, tugging on the short shirt I had on, wishing it were suddenly a dress. Or a robe.

Or anything longer than a shirt.

Aiden’s eyes perused my body with a wide grin on his face as he casually tucked his hands behind his head. I tried not to notice the way the muscles in his arms flexed.

Or the fact that, besides a carefully placed sheet, he was basically lying naked before me.

“Oh my God,” I whispered. My fingers raked through my hair as I tried to remember the night before. “We didn’t…did we?”

The question had him immediately sitting up in bed, causing that well-placed sheet to shift.

I turned around, my cheeks flushing as heat spread through my body. He wasn’t just naked. He was naked and very much awake.

“You don’t remember?” he asked as I listened to the bed groan as he stood.

I heard the telltale sign of jeans being zipped, giving me the courage to turn back around. Sure enough, he was decent.

Well, as decent as a shirtless, hot-as-fuck Brit could be. God, I thought his muscles had muscles.

“Um, no,” he answered, but there was a hint of sadness to his eyes as he reached down to grab his shirt off the floor.

I let out a tiny whimper of protest as the black T-shirt slid down his body.

He really was beautiful.

He pointed to the pile of clothes and the mostly empty alcohol bottle on the nightstand, that sadness drying up as he let out a breath and straightened, his features hardening. “I think that’s pretty clear.”

My arms folded across my chest before I realized that only brought my shirt higher up my waist. Aiden didn’t miss the extra peek of flesh either as I watched his grin widen.

“Ever?” he echoed, surprise written all over his stupid face.

“Yes. Ever. Why is that so hard to believe? Do I look like the one-night-stand kind of girl?” 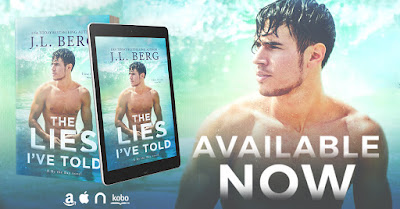 I’m a California native, who lives in the South – Virginia to be exact. I still prefer sushi to fried chicken, avocados to okra, and I absolutely loathe humidity. I do love watching the seasons change though. My husband and I have been here for over a decade, and I still get giddy like a school girl every time it snows. It’s magical!

I’m married to my high school sweetheart, and we’ve been blessed with two beautiful daughters and two rescue pups I like to call my “coworkers”. I’m obsessed with chocolate, minions, anything Harry Potter and I love to watch reruns of Friends and Gilmore Girls!