Review: Swept Into Love by Melissa Foster (The Ryders #5) 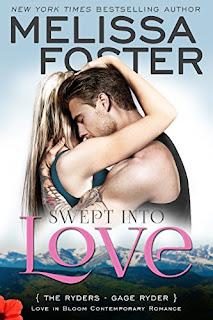 Harborside Nights remains my favorite Melissa Foster series, but with the release of the fifth and final novel in The Ryders, this other series has become a very close second. I've enjoyed the stories of five of the six Ryder siblings (I've yet to read Cash Ryder's story via Flames of Love), but I confess that Swept Into Love is probably my favorite in the entire series. I loved Gage Ryder and Sally Tuft's love story and how different it was from the first four books. The fact that I enjoyed the books that came before it meant that I had certain expectations and those expectations were easily met, and even better? They were surpassed! Ah, if only all series enders were as fabulous as this one.

It's been about six years since Sally Tuft's husband passed away in a skiing accident. It was soon after that Sally met Gage Ryder, the man who would become not only her best friend but someone her then-teenage son could lean on. Underneath their friendship was an attraction that Gage was waiting to pursue, wanting to make sure that Sally was no longer mourning her husband's death. When they head to Vegas to take care of the opening of another location for the youth center they worked at, the unexpected happens and their relationship changes. They say what happens in Vegas stays in Vegas, but this secret has Gage tempted to shout it from the rooftops. However, Sally's saddled with guilt. In order to embrace a future with Gage, she'll have to let go of her past, or is it too late?

From the opening salvo to the heartwarming ending, thirty-five-year-old Gage and thirty-eight-year-old Sally's story had me fully engaged. I empathized with Sally, especially since it's not as if her marriage was one fraught with bad memories. Would moving forward mean saying goodbye to everything she had with Dave, her late husband? But my heart also went out to Gage because the guy had been patient for six years and even though it wasn't as if he had confessed having been in love with her for that long, the fact that she made him wait even longer because she wasn't prepared to let everyone know their secret made me want to give the guy a hug. One of my favorite peripheral characters had to be Rusty, Sally's twenty-year-old son, who felt authentic. The Ryders may have ended with Swept Into Love, but it also gave us a glimpse of the upcoming The Montgomerys, and I can't wait. Five stars! ♥

Read my reviews for The Ryders series: