Review: Sicken of the Calm by Marina Vivancos (Fox Lake #1) 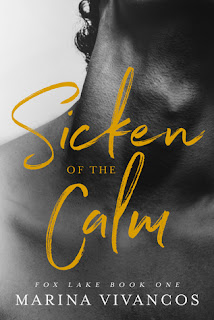 Note: A review copy was provided by the author via IndiGo Marketing & Design.

Don't you just love it when a book turns out to be so much more than you were hoping it would be? That's exactly what happened while I was reading Sicken of the Calm, the debut release of Marina Vivancos the first novel in her Fox Lake series. This story had all that delicious angst that I crave in books, and it also had an intriguing twosome for its main characters--football playing architecture student Joaquin and blogging journalism major Ezra. This was a story of two young men exploring their sexuality, delving into their preferred forms of kink, and pushing the boundaries of love, friendship, and everything in between, written with a poetic and temperate voice.

Joaquin has never forgotten Ezra, the boy who went up to another boy in their high school and asked him out on a date. It was a public declaration of Ezra's sexuality, and while he may have been ridiculed and bullied by some of their classmates, Joaquin admired Ezra's bravery. It was this same bravery which led to Joaquin's own coming out a year later to his family and closest friends. It wasn't until two years after studying at Fox Lake University that he would once again cross paths with Ezra. This time, they are no longer mere students who go to the same school. Pansexual Ezra helps Joaquin explore the facets of his bisexuality and curiosity of BDSM. It is when they start to become friends that the casual starts to feel more personal, but will either of them lay claim to the other?

For those wondering where the title comes from, it's a line in a poem written by Dorothy Parker entitled Fair Weather. If you're familiar with this particular bit of poetry from the famed writer and you've read Vivancos's debut novel, then you'll understand why the title suits the story. Joaquin's life has, for all intents and purposes, been calm; it's Ezra that brings the chaos, and when I say that, I don't mean Ezra's messes Joaquin's life up with his presence in it. If anything, it is Ezra that brings Joaquin to life in ways that the latter never imagined possible. On the other hand, it is Joaquin that allows Ezra to see that there is someone who loves and accepts him wholeheartedly, just the way he is. For all their openness and honesty, there are some things that these two needed to do a better job communicating, but that's all part of their love story. Five stars for Sicken of the Calm. ♥

Purchase Sicken of the Calm on Amazon.