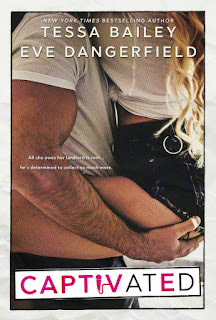 A new writing duo has burst onto the scene with a romantic comedy read that's almost as funny as it is filthy. Tessa Bailey and Eve Dangerfield are a pair to be reckoned with. While I'm quite familiar with Bailey's writing, Dangerfield is a new-to-me author, so this standalone novel was basically my introduction to her writing. They've given readers a twenty-six-year-old Aussie beauty named Autumn Reynolds who happens to be a veterinarian who moved to New York to be with her boyfriend who was chasing his dream of making it big in the world of improvisation and a brooding beast of a man named Blake Munroe in his early thirties who happens to be the beauty's landlord and prefers to keep to himself. Neither one of them has much in common... or so it may seem!

She's the light to his dark, but neither one of them have really exchanged much in terms of conversation over the years. But what neither one of them knows is that Blake's been crushing on Autie since he first met her, and Autie's got some really dirty fantasies with him in the starring role. And then Blake finds himself staring at a drawing that makes it more than clear just what Autie's got going on in that head of hers. With her now very much single, they agree on three dates and a whole lot of sex that could check everything off of Autie's naughty wish list. However, the chemistry between the two of them is unlike anything they've ever experienced with anyone else. In order for them to have any hope of a future together, Blake has to break free of his past and Autie has to let go of her fears.

This was a rowdy and raunchy read. I liked both the main characters and found them to be every bit as charming in their own ways. The story was entertaining and even had me grinning and laughing at times. There was also a good cast of supporting characters that I found myself really liking, particularly the tenants who were living in Blake's building. Talk about a bunch of unexpected but still really nosy matchmakers! But amidst all the humor and hot sex, there's a fair bit of angst and romance as well. There are reasons why Blake is the closed-off guy that he is today, and while Autie helps to open that heart of his back up, she's also got her own issues going on. Overall, I enjoyed everything that Captivated had to offer and I hope Bailey and Dangerfield write together again. 4.5 stars. ♥