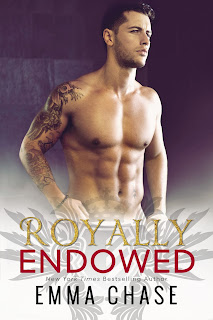 A royal bodyguard and the sister of a royal princess. Logan St. James was tasked to keep watch over Ellie Hammond, and if it's one thing Logan has always taken to heart, it's his job. But the more time he spends with Ellie, the more that heart of his is telling him that she isn't like all the others he's had to protect in the past. She's beautiful inside and out and she makes him feel things that he's never felt with anyone else before her. For five years, he's known all about the crush she's had on him, and now at twenty-two, she may seem to be ripe for the picking, but Ellie deserves to be with a man who can make her dreams come true. She should have what her sister has--a prince or someone belonging to the peerage. That someone is certainly not Logan. However, Ellie knows what she wants and now that she's older, she's ready to show her bodyguard just how much they belong together.

Royally Endowed is the third and what I'm guessing is the final novel in the Royally series penned by bestselling author Emma Chase. We don't have a royal prince as our hero here, though I dare say that Logan St. James is quite princely in his own right. He's paired with none other than Ellie Hammond, younger sister to Princess Olivia, who is married to Prince Nicholas. She's only seventeen and he's five years older when he's asked by Nicholas to keep an eye on his sister-in-law and to stay in New York for the duration. There are events in this story that overlap with those in the first two novels, but you can absolutely read this as a standalone if you haven't gotten around to reading the other two (but seriously, you need to read Royally Screwed and Royally Matched because Princes Nicholas and Henry are royally delish as are their royal love stories with Princesses Olivia and Sarah, respectively).

As always, Emma Chase knows how to give her readers what they want most--a well-written romantic comedy with a hot hero and a heroine who captures the hero's heart. Unlike the first two couples, there's a fair bit of history that's in play when it comes to Logan and Ellie, what with him being her bodyguard for five years. Even though she isn't an actual member of royalty, I totally understood why Logan was hesitant to pursue anything since she was someone who was under his care. This story also has an added element of suspense and a bit of action thrown into the mix, which shouldn't really be surprising since Logan IS a bodyguard and not having either of those aforementioned elements would have been more of a shock. If this is really the end of the series, I think it ended on a really good note, especially with everything wrapped up nicely in the epilogue. 4.5 stars for Royally Endowed. ♥

Read my reviews for the Royally series: