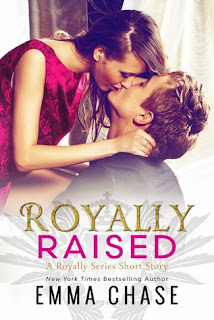 Royally Raised is a short story written by bestselling author Emma Chase and is set about two decades after the events in Royally Matched. While Nicholas and Olivia are part of this novella, it really is mostly about Henry, who is now King of Wessco, and Sarah. This takes places ten years into King Henry's being on the throne, having taken over from his grandmother. All seems to be well with King Henry, but being a monarch isn't all about pomp and circumstance, especially when part of your job is to prepare your heir apparent--in this case, it's nineteen-year-old Jane, Crown Princess of Wessco. How do Henry and Sarah make sure that their daughter will be ready for what awaits her when she becomes queen, and how do they manage to take care of everyone else? It's all in this story...

There's a saying that goes "Heavy is the head that wears the crown," and it's one that proves true for Henry, especially with the legacy left behind by his beloved grandmother. However, this short story also highlights that the responsibilities of being both a husband and a father weigh just as heavily on Henry as well as on Sarah. The story readers get here reiterates just how much growing up and maturing has taken place. This is a very different Henry from the one we first met in Royally Screwed and got to know better in Royally Matched, though the change in him did begin to take hold in the latter. This story does make me curious about the next generation of Pembrooks, especially Jane, who seems to be the reincarnation of Queen Lenora. I'm giving Royally Raised 4.5 out of five stars. ♥

Read my reviews for the Royally series: